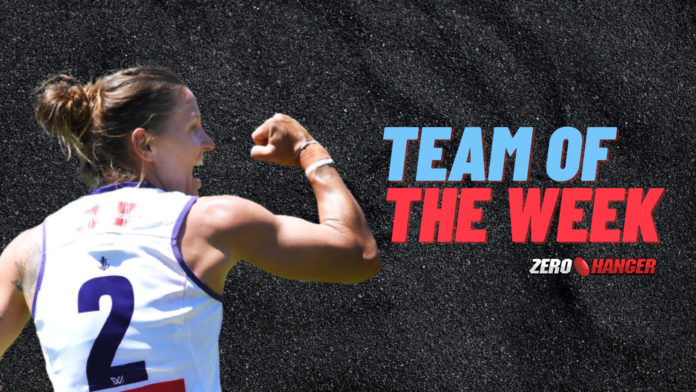 Season six of the AFLW competition is officially underway with Round One bringing tense moments, blowout scores and as always, standout performances.

Kiara Bowers stamped her authority on the competition once again, while Monique Conti delivered on the prime time stage. See Zero Hanger's offical AFLW Team of the Week below.

Young defender Biddell was impressive in defence as Adelaide triumphed in the grand final rematch. The 23-year-old, who has played 11 games for the Crows since her debut in 2020, picked up eight disposals in the Sunday afternoon affair as the Crows backline limited the reigning premiers Brisbane to just one goal for the match.

It was a dim evening for the Saints in the season opener, losing to the Tigers by 38 points, but Lucas-Rodd stood tall in defence in the face of mounting pressure. The 25-year-old had a team-high 20 disposals and an impressive five tackles, but it wasn't enough to hold back ten goals from the Tigers.

Coming off a second place best and fairest finish at Collingwood last year, Schleicher continued her form in Round One as the Pies ran over Carlton in a 19-point win. The former basketballer was impressive throughout, picking up 15 disposals, eight marks, and drifting forward to kick a major.

Whether floating forward, anchored back or in the locker room, the Western Australian is always at the centre of the Pies' party. #AFL https://t.co/lqLc8qCAqY

It was a tough loss for the Suns, but 2021 club champion Ahrens led from the front throughout the 15-point loss to the Giants. The 30-year old collected a team-high 14 disposals and registered 3 tackles during her time down back, but couldn't put a stop to the Giants attack.

The Demons were in impressive form in their win over the Bulldogs on Saturday night, as was their 2020 All Australian Birch. With 18 possessions to her name, five contested, Birch was a rock in defence, ending the night with 13 kicks and one tackle.

With captain Emma Kearney an out due to Covid-19, Riddell stood tall for the Kangaroos in their tight 8-point win over Geelong. The midfield star set the field alight throughout the match, ending with 35 disposals and six tackles in a best on ground performance.

The Giants veteran led a dominant midfield unit in the strong win against the Suns. 30-year-old Eva shared the equal most disposals on ground with teammate Alyce Parker with 21, while the skipper led from the front with 11 tackles, a game high. Dominating the game in the second half to run out as winners, the Giants followed the lead of their in form captain.

An established star of the competition, Prespakis continued where she left off in 2021 in the Blues 19-point loss to Collingwood. A team-high 16 disposals kept the engine room moving for the Blues, while her four tackles were valuable pressure against a quick Collingwood outfit.

Fremantle were awarded the derby honours with a 28-point win of rivals West Coast with impressive performances from some of their stars adding to the joy. Antonio was awarded joint best on ground honours with teammate Kiara Bowers for her dominant display up forward, kicking 3.1 from 12 disposals.

She's kicking them from everywhere 😮

Woodland impressed with pinpoint accuracy on Sunday afternoon as the Crows ran out victorious. The 23-year-old former Demon didn't miss a beat in the forward line, collecting six disposals and kicking four of Adelaide's six goals.

The Giants veteran was important once again in the matchup against Gold Coast on Sunday, providing a strong target up forward. The 40-year-old Irishwoman was the leading goalscorer on the ground, kicking two majors while taking four marks. In a two goal win for the Giants, Staunton's presence up forward, especially her last quarter effort, was influential.

With the Bulldogs limited to just three goals at their end, Hore was instrumental in the forward half for Melbourne, kicking two of their six goals. The 26-year-old, who won goal of the year in 2020, collected ten disposals to compliment her two majors, but will get the most recognition for her classy snap that sealed the win for the Demons.

In a commanding 38-point win, Richmond's forward line were firing. Captain Brennan was one of the most influential, kicking two goals and picking up 12 disposals in a stellar effort. While the Tigers went on a run of nine consecutive goals, Brennan was a strong target in the forward line, sharing the goods with her Tigers teammates.

Coming off the back of a career best season in 2021, Moody continued her fine form in Carlton's loss to the Magpies. The All Australian ended the day with eight possessions, six of those contested, and 25 hit-outs while her contribution around the ground was invaluable for an under pressure engine room.

An undeniable star of the competition, Bowers didn't miss a beat on Saturday, sharing best on ground honours with teammate Ebony Antonio in the derby. The 30-year-old continued her stellar 2021 form that saw her awarded a joint AFLW best and fairest medal with an impressive display against the Eagles. With 24 disposals to her name and a remarkable 14 tackles around the ground, Bowers looks set for a fourth All Australian appearance in 2022.

An early best and fairest contender, Conti put in a stellar effort in the season opener against the Saints. The best on ground effort saw the 22-year-old collect a stunning 29 disposals and nine clearances, while her seven tackles put more pressure on a crumbling Saints side.

A small light in a Saints side maligned by injury, White was valuable around the ground and in front of goal, collecting 14 disposals and kicking a long range goal to get scoring underway in season six. In addition to hitting the scoreboard, White had laid an invaluable 11 tackles, putting pressure on a dominant Richmond side.

In her debut match Prespakis proved that she was worth the hype of a number two draft pick. In the eight-point loss to the Kangaroos, Prespakis racked up an equal team high 20 disposals, 12 of those contested, and seven clearances. Additionally, the 18-year-old laid six tackles in the tight loss.

We've seen what her sister can do, but it's time for Georgie Prespakis to make the family name her own, debuting today against the Roos at Arden Street.

The 21-year-old Demon was influential in the midfield as the Dees ran over the Bulldogs at Whitten Oval. Picking up 17 disposals Hanks was one of the best around the ball for Melbourne, while her game-leading ten tackles proved too much for the Dogs.

The Eagles captain put in a valiant performance in the derby loss, kicking the Eagles' first goal of the match early in the third term. In a disappointing day for the West Coast side, Swanson was the best of them, finishing her day with a team high 23 disposals and six tackles.