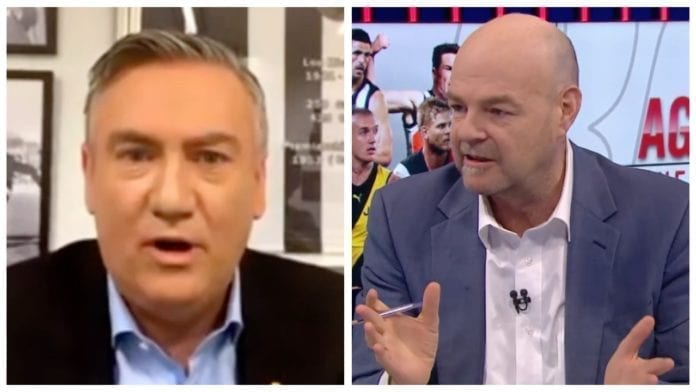 McGuire revealed on Fox Footy’s AFL 360 that Sidebottom had simply “walked out the wrong door” after “he drank Scotch that he doesn’t normally drink” in the lead up to police reportedly finding him half naked on the street in Williamstown.

The response angered Robinson, who believes McGuire’s take was jokey in nature to what is a serious incident.

He demanded Collingwood and Sidebottom tell the full story.

“I wouldn’t have let him get away with the old fashioned ‘drunk on the coach asleep and wake up and go out the wrong door’. How many times have you done that in your life?” Robinson said on Fox Footy’s AFL 360.

“If you’re protecting Steele, just say it. There’s a gap in this story. What time did he leave Daniel Well’s house to 7:30 in the morning when a witness told me he was near enough naked in a 2 degrees on a Sunday morning?

“The AFL, they know. No one has explained it, Steele Sidebottom says he can’t remember it – and he may not – but witnesses have seen him. Eddie is just trying to turn that into a bit of a joke to what was a very serious question.

“This story has legs still and Collingwood would want it to go away. But the problem is there are questions still to be asked and they need to be answered – the public would prefer [them to be answered]. You’d think Collingwood[‘s] people deserve to know most of the story here.

“People will say ‘why should they tell you that?’

“Well, when you’re getting suspended for four weeks and the AFL portioned some of that suspension to the moments that happened after you leave Daniel Wells, put your hand up Steele. Have a press conference and say ‘hey mate, I’ve really mucked up here and that is what happened’.

“Everyone will say ‘good on ya. You’re an idiot, but good on ya’.

“We haven’t got the full story.”