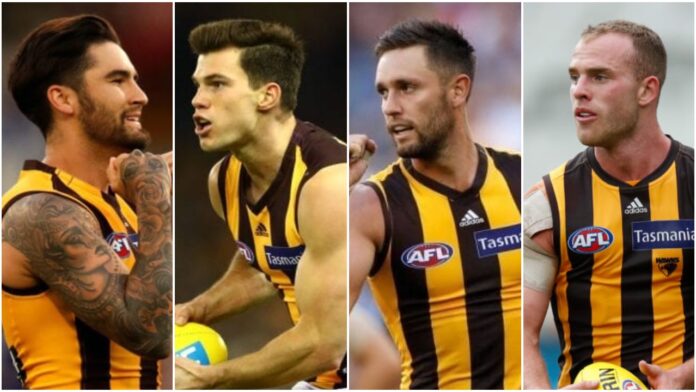 Hawthorn fans have potentially seen their club's off-season planning flipped on its head in the wake of comments made by president Jeff Kennt in a letter to members this week.

Both Kennett and newly-appointed senior coach Sam Mitchell have looked to explain the club's stance for the trade period however, yet rival clubs are believed to be mulling over potential moves for a quartet of contracted stars.

Jack Gunston, Jaeger O'Meara, Tom Mitchell and Chad Wingard have quickly become the face of speculation at Waverley, with there to be some suggestion each of the Hawthorn foursome could be 'gettable' for the right price.

That price is believed to be high-end picks for next month's National Draft, with Sam Mitchell looking to strengthen the club's draft haul in his first off-season as coach.

Hawthorn currently hold picks 5, 21, 24, 56 and 62 for the Draft, with further first-round selections a great desire.

Should the Hawks formally open up discussions with rival clubs for any of the aforementioned four senior figures, there would be several sides that would be keen to potentially send their top draft selection to Waverley.

With this in mind, we take a look at the best clubs suited to each of the four headlined Hawks.

The sharp-shooting spearhead has been a great service to the club since moving from Adelaide ahead of the 2012 season.

Having been a key cog in three flags with the brown and gold, Gunston would offer any club an unparalleled degree of premiership experience that you can't find elsewhere.

The veteran forward would be seen as a stellar signing for the Swans, reuniting with former premiership teammate Lance Franklin and helping the development of young gun Logan McDonald as the Bloods embark on another premiership tilt.

The trio would be a lethal combination for John Longmire, with All-Australian forward Tom Papley at their feet and versatile star Isaac Heeney also aiding the attack.

With the Swans understood to be facing salary strains, and the Hawks likely to be able to pay a portion of Gunston's contract, a cheap and formidable offering for the 209-gamer may be a win-win for both clubs.