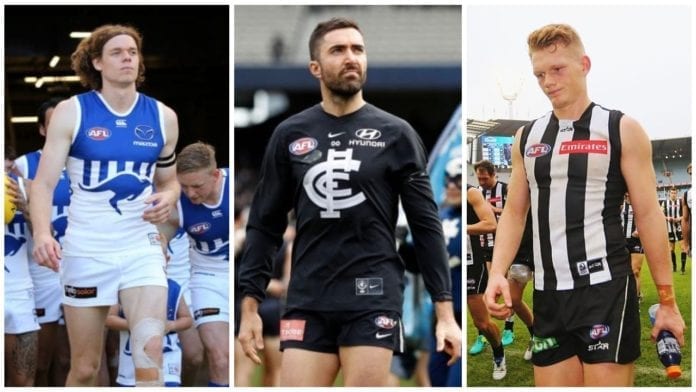 All-Australian selection elevates the status of a number of stars every year.

Any player can have one good night-out - but to perform across the ups and downs of a whole season takes a level of class and consistency not many possess.

Despite this, the release of the All-Australian team every year invariably provokes discussion over the notable snubs - a squad of 22, after all, can never have room for everyone.

Below we've listed the 15 best current players without an All-Australian jumper to their name, but have had a career deserving of the honour. While stars like Jordan De Goey and James Sicily have certainly now gone past many of the names on this list, we believe these names have put in a longer body of work over their careers - to deserve at least one AA honour.

Honourable mentions go out to Dion Prestia, Stefan Martin, Ben Cunnington, Devon Smith and Nick Haynes, who are all well and truly in the conversation.

But onto the real stuff. In no particular order, here are the 15 best current AFL stars without an All Australian....

The Carlton veteran has had a career many would envy. The 326-gamer was a steal at pick 45 in the 2002 National Draft and is now its sole survivor. He's amassed many years of great quality and perhaps came closest to All-Australian honours in 2016 when he averaged 27.2 disposals per game, but was cut from the 40-man provisional squad. Hopes of a nod now are fading, as Simpson enters what will probably be his final year.

Another loyal clubman, Jones played his best footy during the darkest years of the Demons' interminable rebuild. He went back-to-back-to-back in the club best and fairest and polled impressively in the Brownlow for a player from one of the league cellar dwellers. Like Simpson, his window to make the team is very much behind him.

Tex has been a target of some in recent years, as the Crows have continued to fail to recapture the magic of their 2017 campaign. But when his career is read as a whole, there's no doubt Walker has been very stiff to miss out on All-Australian honours. Tex is still young enough to find again his very best form, and perhaps secure that elusive All-Australian selection.

While still relatively young, Coniglio has been a star performer for the Giants for some time now, and he was sorely missed last year in their dismal grand final showing. After finally re-signing with the Giants for 7 years, Coniglio would hope to secure at least one All-Australian nod before that contract is out - and probably at least two or three.

Gibbs rebounded from early criticisms - in large part owing to his status as a number 1 pick - to become one of the Blues' most consistent performers over a number of years. His stand-out year was 2014, where he scooped Carlton's best and fairest and was named in the 40-man All-Australian provisional squad. That might be the closest the 265-gamer comes - Gibbs battled to stay in the Crows first team in 2019, and 2020 looms as a make-or-break year for him.

Treloar has got to be one of the unluckiest players on this list. Since arriving at Collingwood, he's put together four genuinely elite seasons, never averaging below 29.5 disposals in any of them. The umpires like him - he amassed 21 Brownlow votes in 2016 and 18 last year - but the All-Australian judges seem to be holding a grudge against the 27-year-old. Of course, he's not the only midfielder to be squeezed out of the almost always stacked All-Australian midfield.

Now a 200-gamer, Shuey has down pretty much everything in his career except secure that elusive All-Australian jacket. The 2018 Norm Smith Medalist will surely value his premiership medal more highly than anything, but after years of top-notch performances, he stands alongside Treloar as one of the unluckiest to miss out on.

Across the last three seasons, Ben Brown has kicked more goals than anyone - 188 across 66 games - but that hasn't led yet to an All-Australian selection, despite him making the 40-man squad multiple times. Runner-up in the Coleman Medal on two occasions, and third on another, he's seemingly had the same fate in the All-Australian race - the next-in-line behind one or two superstars. Barring injury, he'll surely secure a jacket before his career is out.

They weren't their best years, but Steven was the Saints' shining light during the mid-2010s, racking up four best-and-fairest awards between 2013 and 2018. After a difficult 2019, we're hopeful Steven will recapture his best form at the Cats and push for the All-Australian honour that has eluded him.

A mainstay in a side that, for the last decade, has never been far away from the top of the ladder, Duncan has perhaps suffered for his proximity to league superstars like Joel Selwood and Patrick Dangerfield. Now 28, Duncan has shone in more big moments than many veterans of the game, but he is yet to clinch an All-Australian spot.

Tarrant has been one of the best, if underrated defenders in the game for a long time now. He remains North Melbourne's defensive lynchpin, rarely beaten in one-on-one contests. His sole individual honour to date, however, is the 2016 club best and fairest.

The former steeplechaser has proven a revelation ever since the Cats picked him up in the 2012 rookie draft. He has forged a well-won reputation as one of the most versatile players in the game, translating his potential into two club best and fairest awards. While making the 40-man provisional squad in 2019, he continues to search for his first All-Australian honour.

Big Sauce Jacobs was one of the best ruckmen in the game for a long time, and while his best days are behind him, he found a new home in the off-season at the Giants. While he missed out on a premiership with the Crows in 2017, Adelaide fans will always remember him for his stellar performances in big games, especially the showdowns, where he was adjudged best-on-field on three separate occasions.

Hill won three premierships as a flashy wingman in Hawthorn's premiership sides, but it was after he was traded to Fremantle that he really became an established star of the competition. Many thought he was snubbed from last year's All-Australian side - he amassed 25.1 possessions across 22 games. Now back in Victoria with the Saints, the question remains whether Hill can bolster an under-performing team - probably similar in quality to the Dockers - toward finals action.

Ward has been a warrior since his debut in 2008, and has led a Giants midfield consistently challenging for finals success. While a devastating ACL injury last year ruled him out of most of the 2019 season, Ward will be looking to pick up where he left off when he hopefully returns to action later this year.

The former co-captain tabled 27.1 and 26.8 disposals in 2017 and 2018 respectively, and wasn't too far off the pace in the 2015 Brownlow Count, accumulating 19 votes. But in a star-studded midfield, Ward in 2020 will need to first secure a consistent spot in a side that looks destined to challenge again for the premiership.