Australia's #1 independent AFL news source
More
Home AFL News Team of the Round Team of the Week: Round 21 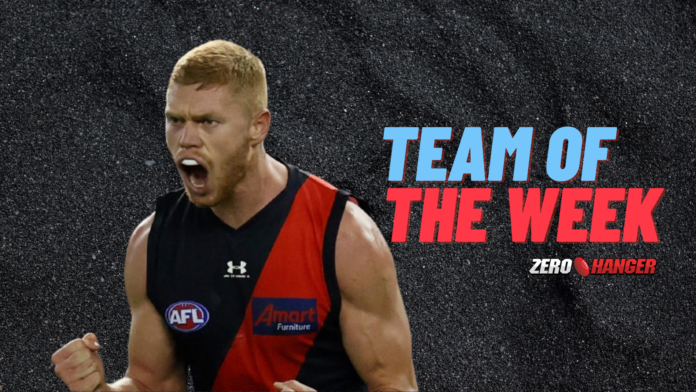 While the result was closer than the Power would have liked, star recruit Aliir gave fans something to smile about. Since making the move from Sydney, Aliir has proven himself as one of the most valuable defenders in the game.

On Saturday night, the 26-year-old took home the Showdown Medal after a best on game performance, finishing the night with 21 disposals, 16 of them being intercepts, five contested marks and eight spoils.

Scrimshaw was valuable down back for the Hawks as the club defeated the Pies to remain clear of the wooden spoon.

The young Hawk had 26 disposals at an impressive 88.5% efficiency, while he lead the pack for marks, taking 12 throughout the match. The 22-year-old proved his versatility, kicking a goal to put the icing on an impressive performance.

The ever reliable Vlastuin led from the front on Saturday afternoon, fending off a young and enthusiastic North Melbourne side.

After a tough first half against young gun Cam Zurhaar, Vlastuin put recent injury troubles aside and helped his team over the line, collecting 30 disposals, 10 intercepts, 14 marks and two spoils.

After a forgettable Round 20 performance from the Suns, the young team had a point to prove against the Blues. Powell led from the front as his team notched up a 19 point victory, collecting a career high 28 disposals, 11 contested, nine intercepts and seven tackles.

Perhaps most impressive was the 21-year-old's 598 metres gained, both a game and career high, topped off with a Goal of the Year contender to seal the victory for the Suns.

Keeping reigning Coleman Medalist Tom Hawkins to just one goal is one of the hardest jobs in footy, but Taylor managed it on Friday night as his Giants stole a 19-point win from heavy favourites Geelong.

Taylor led the ground for intercepts, taking 17 in total, along with his 21 disposals, 12 marks and three spoils.

Like Scrimshaw, Hardwick stood tall in defence during a late Collingwood attack. One of Hawthorn's best, Hardwick had a game equalling high of seven intercepts to compliment his 28 disposals.

The 24-year-old didn't hit the scoreboard but finished the match with six score involvements and five spoils. In game 100, Hardwick celebrated in style, finishing with 112 fantasy points and a whopping 467 metres gained.

In just his second season, Anderson had one of his best games in Gold Coast's win over the Blues. Anderson led the ground for total clearances, finishing on eight, ahead of star teammate Touk Miller.

The 20-year-old also picked up a handy 30 disposals, seven inside 50's and eight marks. Anderson hasn't kicked a major yet this season but contributed strongly with five score involvements.

The Saints skipper once again led from the front on Saturday night in his team's upset win over the Swans. The reigning best and fairest picked up a game high 34 disposals, 14 contested, and six clearances.

A midfield bull, Steele finished the night with seven tackles and a crucial last quarter goal. In his 100th game for the Saints, Steele showed why he is captain and should be expecting a place in the All Australian team for the second year in a row.

With Essendon's finals chances at stake, Merrett stood tall for his team once again. The leading Bombers possession getter, with 30, the 25-year-old overshadowed a stacked Bulldogs midfield to guide his side to a gutsy 13-point win.

Zorko led his side to a dominant 64-point win over Fremantle with a vintage performance, locking in a top 6 finish for the Lions.

Zorko was the leading disposal getter on the ground, finishing with 34, 17 contested, but the 32-year-old's pressure was instrumental in the victory. Zorko ended the night with seven clearances, ten tackles and an impressive 25 pressure acts.

A career best game for Wright got the Bombers over the line against heavy favourites the Western Bulldogs. In his first season at Tullamarine, Wright has made an impression, kicking a career high seven goals on the weekend.

The 203cm tall forward also took seven marks and had five contested possessions as he proves his worth up forward for his new club.

On a potentially embarrassing night for the Tigers, Baker stood tall when he was needed, picking up a solid 26 possessions and seven marks.

The versatile 23-year-old was solid around the ground and kicked two goals up forward in addition to his nine score involvements and 19 pressure acts.

In his best game as a Saint, Higgins turned rectified some recent wayward goalkicking, finishing with an accurate 4.1.

The off-season recruit looked dangerous inside 50, applying much needed pressure to the Swans backline as the Saints attacked. The former Tiger also finished the night with 16 disposals to go with his goal haul.

Jack Higgins squeezes it through 🎯 pic.twitter.com/fKAMeYKTPU

In his first season as a Lion, Daniher has managed to find some impressive form escaping the injuries that have plagued most of his early career.

The leading goal scorer on the ground with 4, his equal best at Brisbane, Daniher is proving his worth to the Lions and the competition as a worthy recruit. Along with 17 disposals and seven marks, Daniher had ten score involvements as the Brisbane forward line combined to hand Freo an embarrassing Sunday night loss.

Greene was in vintage form against the Cats on Friday night, finding the goals and MRO trouble in a best on ground performance.

When the game was on the line Greene stood up, booting the first goal of the night to open the gates to a wave of GWS scores. The polarising 27-year-old ended the night with 16 disposals and four majors.

One of the Saints' most important players, Marshall was in fine form after a disrupted few months. In the absence of fellow big man Paddy Ryder, Marshall shined in the ruck, winning the battle against former Saint Hickey, finishing with a game high 29 hit-outs and eight clearances. Marshall finished with 25 disposals, 18 contested, and a solid six marks.

Perennial ball magnet Mitchell was back to his Brownlow winning best against the Pies on Sunday afternoon.

Mitchell was the highest possession getter on ground by a margin, collecting 44 touches by the time the final siren sounded. Combined with eight clearances, ten marks and seven inside 50's, Mitchell was a dominant force all day for the Hawks.

The highest Tigers ball winner on the ground (36 disposals), Graham was an instrumental part of Richmond's victory, keeping the club's finals chances alive.

The 23-year-old laid eight tackles, a game high while he fought to keep his side in the game after an early North lead. Ten score involvements and 39 pressure acts were enough to deliver him the best on ground nod and most importantly, the four points.

A versatile contributor at Melbourne, Harmes made his mark on the Monday night stage when it mattered, kicking a big goal midway into the third term.

In this quarter alone Harmes had eight disposals (25 total), two clearances and two score involvements as the Demons blew out to a seemingly unassailable margin.

In an unusual night at Optus Stadium, Petracca's performance was anything but out of the ordinary.

A deserving Brownlow favourite, Petracca willed his team over the line against the fast finishing Eagles. The midfield gun finished with 28 disposals, seven clearances and six tackles in a performance we have all become familiar with.

Quiet achiever Drew brought the Power pressure against the Crows in the showdown on Saturday night.

Rated elite across the competition for tackles, Drew led the field, finishing the night with ten, along with 27 pressure acts. A casual 23 disposals, 15 contested, and seven clearances were also pretty handy for Port who got over the line by just four points.

One of the highlights of the season, Miller continued his dominant form against the Blues on Saturday. Miller picked up 35 disposals, seven clearances and a trip up forward for two goals, making Round 21 the 25-year-old's 14th game in a row with over 30 possessions.

If it weren't for a sloppy early season incident with Saint Nick Coffield, Miller could very much be in the Brownlow conversation.