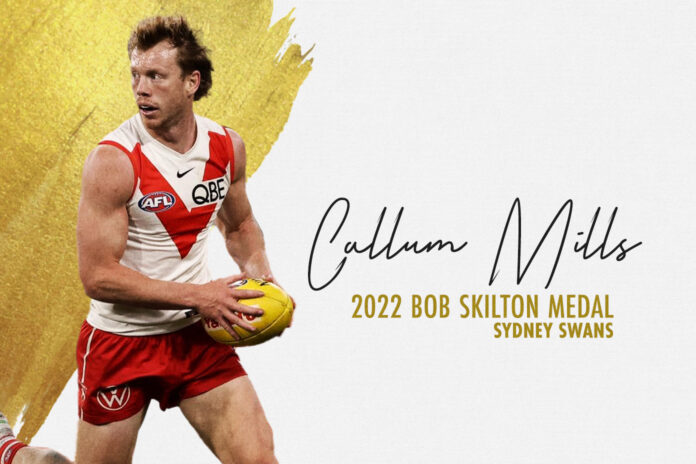 Callum Mills has been recognised for his outstanding efforts throughout the season to be crowned as the club's best and fairest for 2022.

The award was held on Thursday night, and a crew of young guns were recognised for their talent and hard work as the top three in the count were all 25 and under.

Mills won the award with 662 votes and played in all 25 games for the Swans. The 25-year-old averaged 25 disposals and 6 tackles. He also capped the home and away season off with an All-Australian blazer, earning selection in the team for the first time in his career.

Mills said he is honoured to have been crowned the winner for the first time, and he is excited about where the next few years at the club might take him.

“Ever since I came to this football club I have fallen in love with this place, to win this award is very humbling,” Mills said.

“I am super proud to be part of this club. The support the red and white army has shown us the last few years has been incredible.”

The night was also filled with recognition of other swan stars, especially for Warner, who took home two other awards.

Warner closed the night with Paul Kelly Player's Player and the Dennis Carrol Award, Most Improved, along with finishing second in the Bod Skilton Medal. The 21-year-old finished the year averaging 23 disposals and a selection in the All-Australian squad.

Will Hayward won the Barry Round Best Clubman Award and finished his season with a career-high 34 goals. The 23-year-old is a team-first player recognised on the Swans' big night.

Young gun Logan McDonald has taken home the Rising Star Award after an impressive 17 games this season at 20 years old. He was the overall fourth pick in the 2020 NAB AFL National Draft and earnt a AFL Rising Star nomination after dominating with three goals and 16 disposals in their Round 12 win against Melbourne at the MCG.