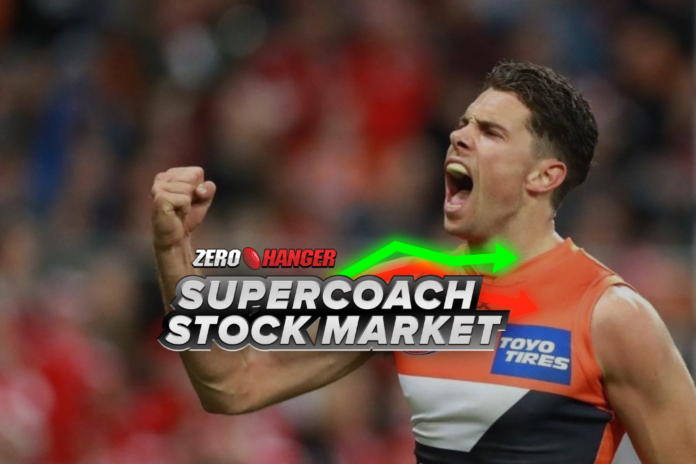 It's nearing the halfway point of the SuperCoach season and the bye rounds are just around the corner, so that needs to be factored in when trading this week, as owners' 'boost' option will come in handy during the bye rounds to use those extra trades.

With that being said, it's time to look ahead to next week and see who to buy, hold and sell as Round 11 nears.

The young Suns forward excited on the weekend, kicking five goals down in Ballarat against the Bulldogs, and has a low breakeven of -45 and a projected price rise of $37.5k.

The 20-year old's job security seems strong and he's playing this week in his home town of Darwin so he'll want to impress in front of family and friends when the Suns take on Hawthorn.

A popular downgrade target this week and has already been traded in by 4,800 owners and more to come as the week progresses.

Looks to be a nice option to have on your bench and will have some solid cash production in the next few weeks.

The star Giants midfielder is dominating at the moment, but is only in 8.5% of teams.

Kelly is averaging 112.1 SuperCoach points on the season, including a five-round average of 122.4 and has a low breakeven of 68, so expect him to go over the $600k mark by the end of next round.

Would be a handy point of difference in your midfield heading into the second half of the season, and with an average of 29 disposals per game, Kelly is very reliable week in and week out.

Sinclair is definitely in All-Australian contention across half-back and featured in the buy section of the stock market a few weeks ago due to his consistent SuperCoach scoring.

The Saints defender is currently averaging 110.3 SuperCoach points and has gone over 100 in eight of 10 games this season, so he is reliable as ever in defence.

Has a low breakeven of 67 and a projected price rise of $15k, and he's at a very respectable price at the moment, so hop on now if you didn't a few weeks ago.

Concerns for the Demons as Jackson’s interest in WA increases