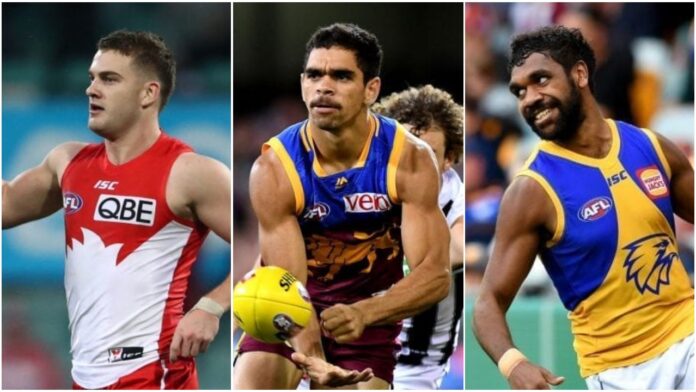 Our next instalment of 'start, bench, cut' sees us examine three of the AFL's most exhilarating forwards in Sydney's Tom Papley, Brisbane's Charlie Cameron and West Coast's Liam Ryan.

As we dissect the careers and recent form of the trio of AFL stars, we hypothetically ponder who to 'start' (our number one choice), 'bench' (our runner-up) and 'cut' (our odd man out).

We make a case for each of the three to 'start', before revealing our final verdict.

Since being picked up by the Sydney Swans during the 2015 Rookie Draft, Papley has never played less than 20 games in a season (with the exception of the shortened 2020 season, when the 25-year-old still managed to play in all 17 games), demonstrating his durability and value in the eyes of Sydney senior coach John Longmire.

Despite rumours floating around post-2020 that the electrifying Victorian was seeking a move home due to familial concerns (with his contract not set to expire until the conclusion of the 2023 season), Papley stayed put in the Harbour City in 2021 and achieved All-Australian honours after yet another classy season in red and white.

Last season, Papley bested his career goals-per-game average of 1.5 when he managed an impressive average of 1.9 goals an outing. He also ranked sixth in the league in total goal assists in 2021, exemplifying his frequent and damaging involvement in Sydney's forward attacks.

Cameron, a fan-favourite throughout his AFL career, initially made a name for himself with the Adelaide Crows (who selected him at the 2013 Rookie Draft) before making the switch to the Brisbane Lions at the conclusion of Adelaide's 2017 grand final season.

The 27-year-old has been starved of success since the commencement of his AFL career, falling short with the Crows in the 2017 grand final before multiple finals failings with the Lions since his switch in 2018. However, his level of play has never faltered.

In 2021, Cameron ranked fourth in the league in total goals and sixth in total marks inside 50. The lightning-quick forward also ranked within the top-10 in total goals and total tackles inside 50 in 2020, providing a very attractive target inside Brisbane's forward-50 alongside the likes of Joe Daniher and Eric Hipwood.

Cameron, the oldest of the trio and most experienced in terms of games played (151, as opposed to Papley's 122 and Ryan's 69), will be looking to do everything in his power to help push the Lions to another shot at premiership contention.

Since being selected with the 26th pick in the 2017 National Draft, the high-flying Ryan has undoubtedly been the most thrilling piece of West Coast's forward-line and one of the league's most damaging smalls.

One of the forward's most hallowed Eagles performances came in the 2018 Grand Final, where the 25-year-old not only provided two goal assists but was also a part of the link-up play which resulted in Dom Sheed's winning set-shot goal.

Despite only managing 14 games in 2021, having battled a shin injury, among other setbacks, Ryan still posted a per-game average of 10.3 disposals, 3.9 marks, 1.7 goals and 2.8 inside-50s; a very impactful line for a player who typically sits deep forward.

Assuming he's healthy and ready to go for the start of the season, the 2020 All-Australian is set to reunite with the returning Willie Rioli among a potent Eagles forward line that also includes young star Oscar Allen and veterans Josh Kennedy and (perhaps) Jack Darling.

Papley arguably has the highest career ceiling of this scary trio of diminutive forwards, as he possesses an admirable level of toughness at the contest and is able to push into the midfield and make a noticeable impact on the game. He's also a definite 'team-lifter' sort of character who could certainly push for a leadership position down the track. He earns our 'start'.

Ryan comes in as our 'bench'. While he doesn't typically journey into the midfield like Papley is sometimes given rein to, the frequent flyer isn't just a goalkicker and high-marker - he's an outstanding defensive forward who has the ability to terrify opposing defenders and cause forward-half turnovers, making him invaluable to Adam Simpson's Eagles. And as previously mentioned about his 2018 GF performance, he's proved that he's a player who shows up in crunch time.

Finally, we've made the tough choice to 'cut' Cameron. When he's firing on all cylinders, Charlie is the best player of this trio. However, due to his slightly older age, the edge already goes to Papley and Ryan. Additionally, Cameron's shortcomings in the 'team success' department may currently be denting his status as one of the league's best forwards.