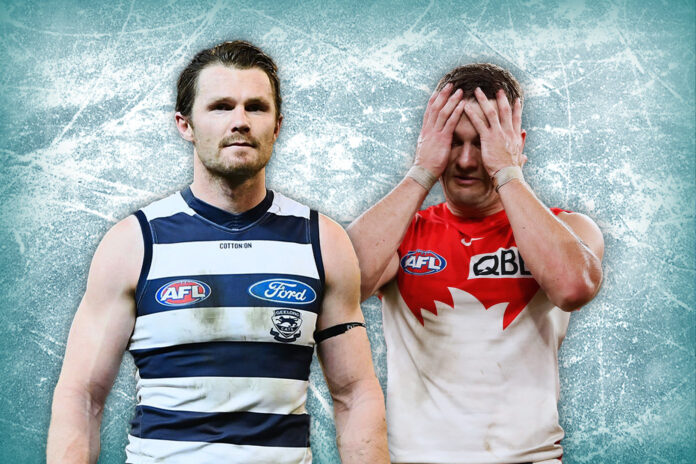 With the 2022 finals series just one sleep away, footy fans are up and about for what is the best month of the footballing calendar.

Ahead of September, many players will be hoping to improve on different aspects of their game to maximise their impact on their team.

However, for a select few, 2022 has been a difficult year compared to most, with form and consistency both posing as major problems.

For such players, the finals loom as a chance to get back to their best in the hopes of winning their side the premiership.

All of the players we have chosen are all great players who are just a notable fraction off their best football.

With that all said, let's take a look at the player from each top eight side that needs to improve for the sake of their team's flag quest.

Unfortunately, it appears as though Patrick Dangerfield has dropped off a significant amount over the last year, albeit due to injury.

The Brownlow medallist has averaged just 20.4 disposals across the course of the year, his lowest since 2012, and is kicking just 0.4 goals a game, his lowest record since entering the league.

Whilst a decline was inevitable, there is no doubt that Dangerfield still has more to give at the highest level and with a flag the only thing left for him to win, the superstar Cat will be desperate for a big September.

With the Cats' midfield their main query, the midfielder's ability to get the hard ball and spread to the outside will be pivotal for Chris Scott's side.

Ben Brown has been solid since moving from North Melbourne to Melbourne without setting the world alight.

At different times throughout the season, Simon Goodwin's side has struggled to score winnable totals.

Thus, if the 29-year-old can recapture his best form, The Demons' elite defence and midfield should see them reaching the same heights as 2021.

Following an injury that saw him miss the first six weeks of the season, Tom Papley has found it hard to regain his best form.

With such pace and skill, Papley is exactly the type of player who can break a congested final open.

Coming into the year, it seemed as though Jack Crisp was going to turn into a superstar midfielder after accumulating 27 touches a game in 2021.

However, despite having a terrific start to the year, the 28-year-old has been relatively poor since the bye.

Palpably highlighting this, Crisp averaged 27 disposals before the bye and has since averaged just 19 touches in a very similar role.

In a midfield ranked 14th for clearances and 13th for contested possessions, the brutal style of footy played in Finals will require Crisp to step up to the plate.

Rory Lobb has had some real standout games during his time at the Dockers and is coming off another solid year, having booted 34 goals.

Unlike the others, Lobb hasn't really been fighting any bad form but rather needs to improve in the potential absence of Matthew Taberner.

Lobb's ability to take marks and kick goals is essential for Fremantle, a side that has been unable to kick big totals all year.

Hence, with a do-or-die clash with a struggling Bulldogs' defence on Saturday night, Lobb will play a pivotal role in the Dockers' success.

Despite showing glimpses of his amazing talent, Eric Hipwood has struggled to find any sort of consistency since his ACL injury last year.

Across the 14 games he has played in 2022, the key forward has only managed to snag 16 goals, kicking over two goals once all year.

Fortunately for him, the one time he kicked over two goals was against the Tigers, who he'll go head-to-head with tonight.

With about four months of footy under his belt, the 24-year-old should be up and firing for September.

Jayden Short was an integral part of Richmond's defence throughout their dynasty, adding plenty of run and carry from the backline.

However, in 2022, the best and fairest winner has been shifted around the ground, seemingly disrupting his form.

With Short likely to slot into the backline for the majority of Richmond's finals quest, his ball use will be important in getting the Tigers' system back in motion.

Further, should Short see himself in the midfield, his ability to do the dirty work in a side that otherwise struggles with contested ball will be essential.

Much like Hipwood, Josh Bruce is a key forward coming off an ACL injury who is struggling to gain any traction.

Thus far, Bruce has kicked just one goal across his five games.

Whilst it seems clear that he won't reach the heights he did in the early stages of 2021, the key forward needs to lift in order to help a Bulldogs forward line that is going up against one of the stingiest defences in the league.

Just bringing the ball to ground and hitting the scoreboard once or twice a game would be enough for Bruce to influence the game.