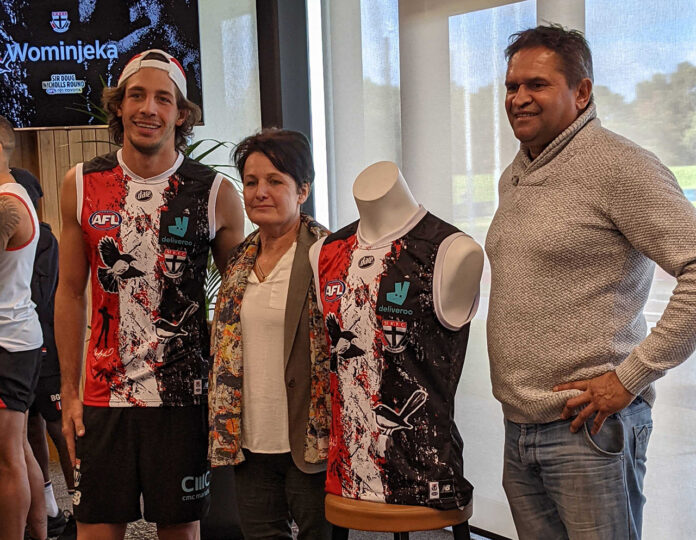 It's not often a football club has the opportunity to release a special feature guernsey designed by a Hall of Fame member of that club.

But St Kilda has today launched their Indigenous jumper for the 2021 Sir Doug Nicholls Round, designed by 251-game legend, Nicky Winmar.

The design features the iconic image that has become synonymous with Winmar's name - Wayne Ludbey's famous photo of a defiant Aboriginal man proudly presenting his black skin in front of a frenzied audience - as well as a pair of Willy Wagtail totems to represent his parents, Neal and Meryle.

Winmar's handprints adorn the back the jumper, a sign of his connection to the club, and a message to the current playing list, that he "will always have your back."

Saints CEO Matt Finnis explained that this season's Sir Doug Nicholls Round is about 'legacy' and that the design by Winmar on St Kilda's new Indigenous jumper sets it apart, given the club "really owns one of the most important moments in race-relations in Australia," a message relayed to him by former Bomber-turned-Saints' Indigenous Welfare Officer,  Nathan Lovett-Murray.

More noted for his on-field exploits than creative output outside of football, Winmar explained that his artistic flair was inspired by the late, experimental fine artist, Jackson Pollock, and renowned sculptor, Lis Johnson.

"I found art a peaceful, calming thing to do," mused Winmar at St Kilda's Indigenous jumper launch at RSEA Park.

Flanked on either side by Winmar and acclaimed cinematographer, Peter Dickson - launching a documentary on the personal stories of racial vilification in sport, "The Ripple Effect."

Current Saint Ben Long explained that Winmar's iconic image from Victoria Park is still something that resonates with every current Indigenous player - even 28 years later - as a "very important moment."

Nicky Winmar played 230 games for the St Kilda Football Club between 1987 and 1998 and was inducted into the Indigenous Team of the Century in 2005. Winmar’s jumper will be worn by the Saints in Rounds 11 and 12 against North Melbourne and Sydney.