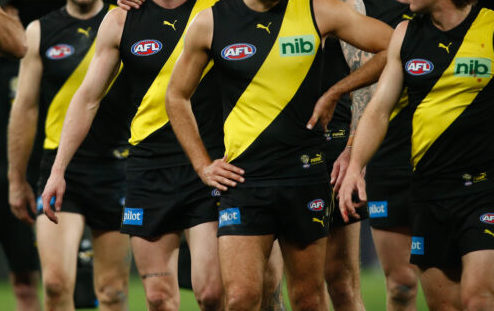 Richmond will reportedly hand local footballer Kaelan Bradtke a training opportunity at Punt Road over the curse of the summer as the Tigers weigh up a call for their final list spot.

Bradtke was among the invites list for the state combine testing ahead of the National Draft after impressing for Ovens and Murray League outfit the Corowa-Rutherglen Kangaroos.

The 21-year-old booted 39 goals to finish alongside the likes of ex-AFL talent Callum Moore, Ben Reid and Jeff Garlett on the O&M League's goalkicking leaderboard.

Bradtke was also listed with Sydney's VFL side this year, with the New South Welshman featuring for the Swans on two occasions, playing against Sandringham and North Melbourne to average eight possessions per game while booting the one goal.

The young utility could join fellow Ovens and Murray product Joe Richards on an AFL list for 2023, with CODE Sports' Daniel Cherny reporting Bradtke will be handed a train and trial opportunity to potentially impress Damien Hardwick over the pre-season and sign with the Tigers during the Supplemental Selection Period.

Richards was drafted to Collingwood at Tuesday night's National Draft with Pick 48 following a dominant season with Wangaratta, where he worked under Reid, a premiership Magpie.

Bradtke won't be alone in trialling for Richmond's last list spot, with Quinton Narkle revealed to have been offered a training opportunity with the Tigers after his delisting from Geelong.

Essendon are also said to be handing out training invites, with former Western Bulldog Brad Lynch and East Fremantle's Reuben McGuire set to be given a chance at Tullamarine.

Former Blue Liam Stocker has been linked with an opportunity at St Kilda over the pre-season as he searches for a lifeline following his departure from Carlton.

The SSP window is expected to open in January, running until March.