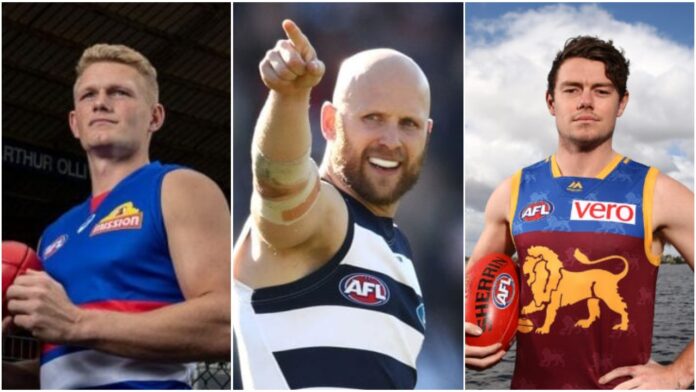 AFL trade deadline day always provides much excitement for fans and AFL clubs, as there are always players rumored to be traded elsewhere, players who request a trade and plenty of pick swaps.

A lot of these trades however go down to the wire and are finalised on the final day of the trade period, also making it an anxious time for fans and clubs to see who will be offloaded and who will enter a new club with fresh opportunities.

Players such as Peter Ladhams, Bobby Hill, Max Lynch, Jordan Clark and Jon Ceglar are all in play head elsehwere, but nothing has been finalised.

Sydney defender Jordan Dawson has already landed at the Adelaide Crows to start the day off, and if there is to be a trade bombshell, it could be one of Hawthorn's stars getting traded for draft picks.

Check out below as we look back on the past five trade deadlines and see the big moves that were made.

It was a frantic final day at the trade table as multiple star players found new homes.

Star forward Jeremy Cameron made his way from GWS to Geelong in the final minutes of the trade period with GWS receiving three first-round picks in 13, 15 and 20 as well as a future fourth round-pick in return.

Star midfielder Adam Treloar made his way to the Kennel to join the Western Bulldogs after being driven out of the Holden Centre in what was a disastrous trade period for the Pies. Collingwood also gave up picks 26, 33 and 42 and got the Dogs' pick 14 and a future second-round pick.

Other trades saw Nick Hind moving to the Saints, Jye Caldwell joining the Bombers, Tom Phillips head across to the Hawks, Jaidyn Stephenson to North Melbourne and Orazio Fantasia to Port Adelaide.

Lots of trades went down in the final hours before deadline, in what was a chaotic evening for the clubs involved.

2019's trade period had a crazy finish to it, with seven trades in the final 20 minutes.

Alex Keath to Bulldogs, Tom Cutler to Bombers, Zak Jones and Dan Butler to Saints, Josh Jenkins to Geelong, Aiden Bonar to North Melbourne and James Aish to Fremantle all landing between 7:10 to 7:30pm.

Former Docker Brad Hill was able to get to St Kilda earlier in the day in a deal that saw Fremantle receive Blake Acres, picks 10 and 58 and a future second and fourth rounder in return.

The big story of that trade period were the big names that were unable to get to their destination club by the deadline.

Joe Daniher, Tom Papley and Jack Martin all missed their opportunity to move to their requested clubs and would have to wait until the pre-season draft for any further moves to be made.

2018 was yet again a busy day with several star players moving on to new clubs.

Star midfielder and eventual Brownlow medallist Lachie Neale got his wish to move across the country to play for the Brisbane Lions with the Dockers receiving picks 6, 19 and 55 in return. The Lions also received pick 30 in the deal.

Key defender and eventual premiership player Steven May went from the Gold Coast Suns to Melbourne in exchange for pick 6.

Exciting forward Jesse Hogan would return home to Western Australia, striking a deal with the Fremantle Dockers which saw Hogan and pick 65 to the Dockers, with picks 6 and 23 heading over to Melbourne in return.

Luke Hodge had announced his retirement earlier in the year, but came out of it to sign with the Brisbane Lions on the last day of trade negotiations with less than an hour to go.

Gary Ablett returned home to his former club Geelong from the Gold Coast Suns, whilst Bryce Gibbs went from Carlton to the Adelaide Crows as Gibbs hails from South Australia.

Charlie Cameron was able to land at Brisbane, whilst Jake Stringer moved on to sign at Whitten Oval.

It capped off a trade deadline day, where many big names shifted to new environments.

2016 saw one of the more frantic deadline days in recent memory with 25 trades completed in the final hours.

Among those trades was former Tiger Brett Deledio joining GWS in exchange for GWS's first-round selection in 2017.

Jaeger O'Meara ventured down the eastern coast from Gold Coast to land at Hawthorn in exchange for pick 10 and several second-round picks.