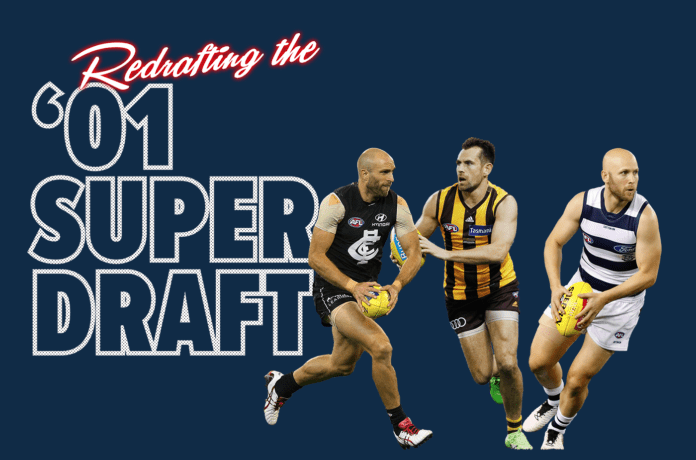 With Luke Hodge retiring and Gary Ablett Jnr in the twilight of his career, we thought it was the perfect opportunity to take a look back at the 2001 AFL ‘Super’ Draft.

The ‘Super’ Draft is widely regarded as one of the best of all time, boasting a number of stars all the way through it. It was also the draft that formed the nucleus of Geelong’s triple-premiership side, one of the greatest teams of the modern era.

Heck, we couldn’t even squeeze in names like Jason Gram, Adam Schneider, Andrew Carrazzo and Brett Thornton this draft was so deep!

Here is Zero Hanger’s re-drafted first round of the 2001 AFL ‘Super’ Draft, including players taken in the Rookie Draft:

Originally selected by Fremantle with pick 56, Medhurst would go on to have a distinguished 168-game career. The small forward played five seasons for the Dockers, before moving to Collingwood to finish his career.

During his time in the west, Medhurst kicked 166 goals, leading the club’s goal-kicking in 2003 and 2004. At the Magpies, the crafty forward kicked 108 goals and earned an All-Australian selection in 2008, before finishing his career in 2010.

MELBOURNE, AUSTRALIA – APRIL 25: Dustin Fletcher of the Bombers attempts to tackle Paul Medhurst of the Magpies during the round five AFL match between the Collingwood Magpies and the Essendon Bombers at Melbourne Cricket Ground on April 25, 2010 in Melbourne, Australia. (Photo by Mark Dadswell/Getty Images)
BackNext

Is this man set to join the game’s elite rucks?