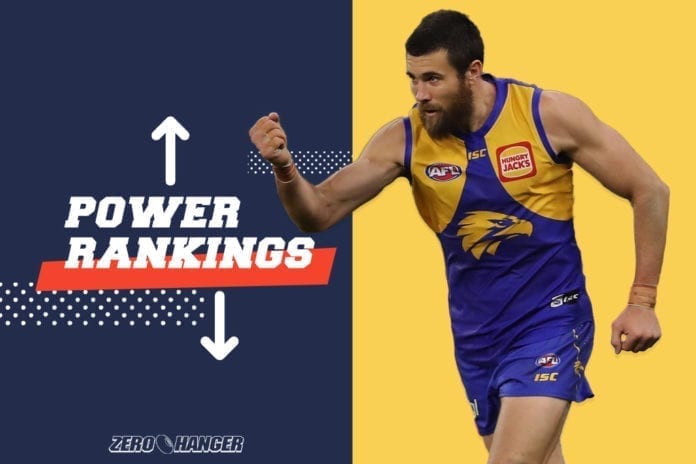 As several contenders find some stability, other finals fancies fall into chaos. Where does your side sit after Round 9?

Both teams only had two losses on their record coming in, but the Lions seemed in another league to the Bombers on Friday night. Top four for the Lions, and the Brownlow for Lachie Neale, look all but sewn up. Their eyes now should be set on a very possible top two berth.

Second-best in the first half, the Eagles slowly but surely clawed the Cats back and when it came to the business end, no Cat could stay with the evergreen Josh Kennedy. Finals-like intensity and a finals-like atmosphere – expect more of the same from Perth and the Eagles moving forwards.

That was just the bounce-back win the Power needed. They choked the life out of a never-competitive Melbourne outfit who have impressed in recent weeks. Port won’t shake off their doubters if and when they perform in the finals – for now, it’s all about biding their time and ensuring they lock in a top-two finish.

St Kilda very much deserve their position in the AFL’s top four. No team has exceeded expectations like them, and they look poised to return to the finals after a long hiatus. And if their batch of youngsters continue to perform like they did on the weekend, this could be the dawn of an era of finals footy for the rejuvenated club.

Still with a host of stars missing, the Tigers jumped back into the winners list and with what had to be their best win all season. Dusty looked back in the second half last week and he was peerless again on Wednesday night. The logistics surrounding several of their big names’ return might still make for an unpredictable finish to the regular season, but make no mistake – no one will want to play a fit and firing Richmond in the finals.

Chris Scott and the Cats are not in the business of very promising losses, but they will surely take more positives than negatives out of pushing the Eagles all the way on Saturday night. If they do have to head out west in the finals, the venue and the Eagles themselves won’t daunt the Cats, especially with several big names back in the side.

A quiet, comfortable win for the Giants on Sunday as they jump back into the eight. Their movement further up the ladder may be curtailed, however, by the loss of star forward Toby Greene to a hamstring injury.

There really isn’t anything like a quiet week for the Collingwood Football Club. Just when the Steele Sidebottom saga had reached its logical end (Sidebottom returning to the side and looking, as usual, elite), another controversy erupts. Whether the Pies were distracted by the AFL’s fine or not, they shouldn’t have lost that game, especially when they had all the momentum heading into the final quarter. They’re now outside the top eight and facing an uncertain second half of the season.

Here we go again. On their best, the Dogs can seemingly beat any team, but at their worst – well, just watch a replay of Wednesday night’s game. As such a flaky team, the Bulldogs would love a double chance in the finals, but we can’t see that happening. For that reason, we can’t see a repeat of 2016 happening either.

Two crimes – the first, Essendon’s performance on the weekend, and second, the fact that they’ve somehow avoided falling in our Power Rankings. If it wasn’t for several other sides absolutely phoning it in, Essendon’s no-show on Friday night would probably have been the story of the round. It feels wrong to write off a side sitting at 5-3, but with their injury woes in mind, the Bombers’ season is seemingly hanging by a thread.

After a 31-0 start, a 31-point win? Blues fans could forgive their side for taking their foot off the pedal, surely. Hold on – what? In a season of dramatic role reversals (and especially in the Blues’ own games) that had to be the most spectacular, with Carlton helpless to stop a Hawks team that had finally woken up. When the Blues look back on the season, this game may very well hurt the most – especially if they miss the finals by one or two games.

Bad kicking, bad football. If they had capitalised on more of their opportunities, the Giants mightn’t have been such comfortable 26-point winners. As it stands, the Suns’ finals dream is slipping away. It doesn’t get any easier this week, with the red-hot Saints waiting on Thursday night.

That was, simply put, the Dockers’ best win in some time. They pounced on a vulnerable  Collingwood to record their third win of the season and put some serious daylight between themselves and the bottom of the ladder. More importantly, even if this season still is a wash, the future of their midfield looks bright, with young guns Caleb Serong, Adam Cerra and Adam Brayshaw providing all the support Nat Fyfe and David Mundy needed to spur the Dockers to a memorable win.

At 31-0, the night and maybe even a few careers looked gone. But the Hawks flicked a switch we haven’t seen for weeks and, remarkably, ran out comfortable 31-point winners. Jarman Impey and Luke Breust looked just the lively, dangerous players the Hawks have sorely lacked during that miserable four-game losing streak. All of a sudden, at 4-5, the Hawks’ season is far from gone.

What, if anything, can we even say about Melbourne? Three years into his senior coaching career, and it seems no one really knows if Simon Goodwin is a good coach, or whether his team is a good AFL team. They certainly weren’t on Thursday night. And in a fortnight’s time, even if they beat Adelaide and North Melbourne, we probably still won’t have the answers to these questions.

That was the feel-good day the Kangaroos desperately needed. After two huge calls at the selection table, North Melbourne came out and thumped the hapless Crows in every department. It was great to see Majak Daw back as well.

Sydney were competitive early, but the game slipped away from them when the Saints began to flex their muscles. After a gusty win against the Hawks last week, they’ve now slipped back to second-last on the ladder and there’s nothing but pride to play for in the second half of the season.

Give the spoon to the Crows now. That was, on paper, the Crows’ best chance to win a game all season, and they looked anything but competitive. You know it’s bad when coach Matthew Nicks has to apologise to Crows fans after the match – after a season of shockers, this has to be the pick of the bunch.