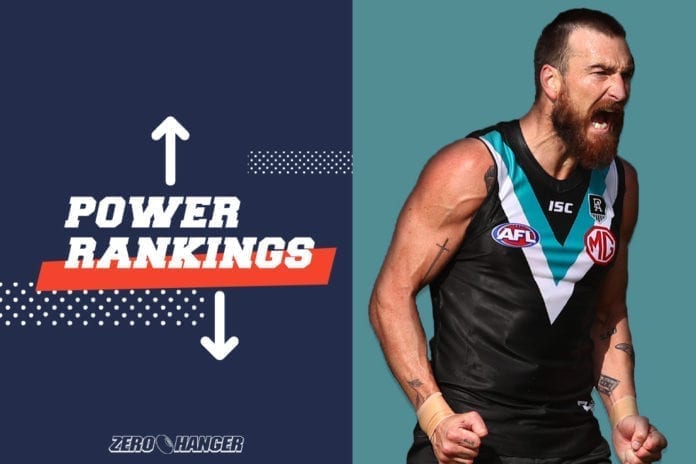 The high-flying Power finally take top spot in our Rankings, and it’s about time. They’re yet to put a foot wrong in 2020, and if Charlie Dixon maintains the form we saw on the weekend, look out. Still, they’re yet to face a real test, considering how dismal the Eagles have been in the Gold Coast hub. Brisbane at the Gabba next round should tell us a lot more.

The Lions were very kind to the Crows, only winning by 40 points despite having 22 more scoring shots. It didn’t matter on the weekend, but they’ll surely have to kick better against the best sides in the competition. Things won’t be as comfortable when they leave the Gabba, but for now, they’re making the most of their extended stint at home.

The loss of star defender Jeremy Howe probably hurts more than their loss to the Giants. The game had a fair bit in common with last year’s preliminary final – the Pies came from behind late but once again fell just short. Hopefully, Howe will be back well before their finals campaign.

If the Hawks faded in the last quarter last week, they stopped flat this week. They still won, but you wouldn’t have known it looking at Clarko in the box after the game. If he can get four quarters out of the Hawks every week, their stay in the top four could be a long one.

It might not be so hard being green after all – new recruit Tom Green looked stellar, especially in the fourth, and Toby Greene starred once again. All up, that was just – just – what the doctor ordered for the Giants, although the team doctors themselves will have their work cut out for them after both Phil Davis and Zac Williams went down with hamstring injuries.

All four points are equal, right? Maybe, but that was about as ugly as they come for the Cats on the weekend. Remarkably, Chris Scott’s side haven’t won – or lost – two games in a row for over a year. If form holds, Joel Selwood and Gary Ablett won’t have much to celebrate next week against a red-hot Gold Coast.

Another challenge thrown at Matt Rowell and the Suns, and another test passed with flying colours. The young superstar more than held his own against Nat Fyfe – how about we throw Dangerfield and Selwood at him next week? That game against the Cats will be a real test for these rising Suns.

They were one of the most active in last year’s trade period and the Saints’ aggressive approach looks to be paying off. Dan Butler is probably leading their best and fairest count after another huge game against his old side, and Brad Hill shook off a potential injury to prove he is fast becoming one of the Saints’ most important players. They’ve now bounced back big twice after disappointing losses – if they can find some week-to-week consistency, they could be finals contenders.

If it wasn’t for Liam Jones’ head – yep, 2020’s headlines really write themselves – the Bombers would still be undefeated. They dominated for periods against the Blues but were otherwise patchy – a week off, and a media storm probably didn’t help. Things were looking a hell of a lot worse for the Bombers just a week ago, so they’ll take a spot in the 8 for now.

The Kangaroos came home with more than a wet sail on Sunday night – another minute and they probably would have stolen it. It’s clear North will be there or thereabouts this season, but whether they have the polish to be a top-8 contender remains a real question. They’ll need more from Ben Brown, who was held impressively by defensive dilettante Ben McEvoy.

Luke Beveridge seems to have flicked a switch at the Kennel – that’s 2-0 on the road in Sydney, and more of the same in the next few weeks will relegate their shaky start to just a distant memory. Although its legacy might not be just as soon forgotten – they’re still 13th despite having the same points as 6th place, thanks to their very poor percentage.

It can’t have been easy being a Blues fan these last few years. At least losing used to be predictable – now four points and a couple of heart palpitations are just another week for David Teague’s side. Next week against the Saints at Marvel will be big, especially now it’s been promoted to a prime time Thursday night slot.

Something is seriously wrong at Tigerland. Sure, they weren’t too far off the pace against the Saints on the weekend, but – come on – did you really expect to be reading that sentence this season? Their pressure and attack on the ball has just fallen off a cliff these last few weeks. It’s all still there, but it’s up to Damien Hardwick to find it before the shortened season rules a line through his side’s finals – forget about premiership – chances.

Despite having home comforts since the league’s restart, the Swans are yet to impress, and Thursday night’s game was no exception. They’ve now lost four out of their last five at the SCG, and in a chaotic season, you have to make those home games count. Someone could try helping out Tom Papley – he was a one-man act against the Dogs, kicking 26 of the side’s 39 points.

It’s far from the African jungle, but Channel 10 are probably becoming interested in the rights to cover the Eagles’ Gold Coast nightmare – We’re the Eagles, Get Us Out of Here! would certainly be better TV than the stuff West Coast are serving up on the footy field. 60,000 fans are waiting back home at Optus Stadium, but they might have already shot their finals hopes in the foot.

If you’re going to play in a game like that, you’d better hope you come out on the winners’ side. The Demons very nearly did, but at the end of the day, 44 points for a day’s play just isn’t good enough. Questions about Melbourne’s coaching box need to be asked – surely Harley Bennell would have been right to play – and, actually, he might have made the difference – and why is Angus Brayshaw spending so much time off the ground?

Another brave loss from the Dockers – we could just copy and paste this every week. They’ve been far from embarrassing in any game this season, but honourable losses are surely starting to wear a little thin for Fremantle fans. Their stay in the Gold Coast hub surely hasn’t been an easy one – the promise of a packed house at Optus Stadium sooner rather than later might be the only thing keeping them going.

Do we really need to write anything here anymore? The Crows are bad, very bad. You know it, we know it. The Crows know it. They employed a novel tactical innovation on the weekend: close your eyes and hope the opposition kicks 23 points from 33 scoring shots. Let’s see if that holds up going forward. 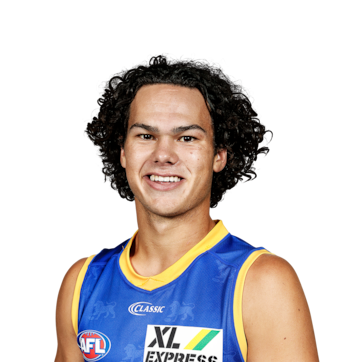