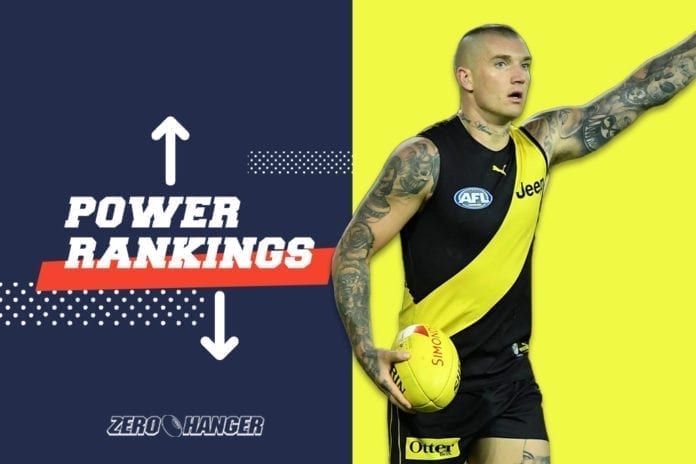 With one round to go of the wildest home and away (for Victorian teams, mainly the latter) season to date, more finals fates have been settled while others will come right down to the wire.

And, can you hear that? It’s the sound of a very ominous roar coming from our new leaders.

The Tigers have made something of a science – and an art – of peaking at the right time of the season in recent times, but this is getting ridiculous. After an up-and-down year, now, with one game to play before finals, the Tigers are once again premiership favourites. It’ll take a hell of a team to knock them off, too. To their finals opponents, good luck – you’ll need it.

Top two – tick. Next up: the minor premiership, which they’ll clinch if they beat the Pies next Monday. First, second – it doesn’t really matter, in the grand scheme of things. What matters is winning that first home final and putting themselves in the box seat for a grand final berth.

They had passed all of their recent tests, but the Cats seriously flunked Friday’s night assignment against the Tigers. Besides a brief fourth quarter blitz, the Cats were toothless all night against a side that looks to still have their number. For now, the Cats shouldn’t look too far ahead – their first priority is beating Sydney and securing top four.

How far our expectations have come for the Lions – they’ve won nine from ten and yet we still want a little more from them. That was the case again on Sunday night, where a late quarter burst helped them run out five goal winners against the Swans. Top 2 is now sewn up – time to sit back and wait for the real stuff to begin.

That was an incredibly gusty win by the Eagles – worth double all their wins back home at Optus Stadium. Unfortunately, it might cost them any hope of doing damage in the finals, if they don’t get Jeremy McGovern and their other injured stars back in time. A double chance would be very handy, although it looks like they’ll just miss out.

The Pies did what they had to against the Suns, and they’ll now officially play finals – something they really should have locked up a whole lot sooner. How far they go in the finals will surely hinge on how quickly and successfully (if at all) they’re able to re-integrate their sidelined stars back into the side.

That was the definition of a comfortable win for the Dogs on Sunday afternoon. They’re now in the driver’s seat to play finals – win against Fremantle, and they’re a lock; lose, and they still might make it. We’re not looking too far ahead, but with a potentially injury-ravaged Eagles up first in a crunch elimination final, the Dogs are set to make another run to rival their 2016 fairy-tale.

The wounded Eagles were there for the taking on Thursday night, and, once again, the Saints just couldn’t quite take it. Their finals spot is safe, but if they can’t capitalise on gilt-edged opportunities like that, they might just be making up the numbers.

One elimination final down, one more to go – before, if they’re lucky, the real thing. The Dogs remain in the box seat but after their thrilling win against the Giants, the Demons are still in with a chance of playing finals. Don’t feel sorry for them if they miss out, though – they’ve dropped too many winnable games of late to be able to blame anyone but themselves.

The Dockers continue to go from strength to strength, and look the team to watch next season. Hell, if they hadn’t gone 0-4 to start the season, they might be playing finals. It was only the lowly Kangaroos, but their forward line just got a whole lot more dangerous if that’s the Jesse Hogan we’ll be seeing in 2021.

GWS made a statement by dropping captain Stephen Coniglio. Well, here’s another statement: the Giants aren’t going to play finals. That, truthfully, was an elimination final against the Demons, and everything – too much – now has to go right in the final round for last season’s grand finalists to even make the finals. There’s dropping your captain, and then there’s dropping him in such a crunch game with the season on the line. Out of form or not, he might have been handy in that final quarter.

The Swans kept with the Lions for most of the match, and truly, Brisbane’s eventual 32-point flattered them. It’s been a spirited end to the season for the Swans, and there’s plenty to like as they head into the off-season. They rise in our Rankings on the back of Essendon’s continued free-fall.

The Suns have been an afterthought for many in the second half of the season. All eyes are on 2021 and Matt Rowell’s long-awaited return to the side. Before they depart 2020, though, it’d be nice to close off the season with one last win against the Hawks.

Hold on just a second – the spoon might just not have the Crows’ name written on it, after all. Three on the bounce for the September specialists and now all they have to do is hope North lose to West Coast (they will) while beating the reigning premiers themselves (they won’t). Whatever the case, this late season run will send the Crows into the off-season with a spring in their step.

What started promisingly has turned into a season of hell for the Bombers, and much remains up in the air for season 2021 as John Worsfold hands over the reins to Ben Rutten. If it wasn’t for their early season win against the Pies, their return for this year would look seriously sad: otherwise, they’ve beaten the bottom four sides and Fremantle, and that’s it.

Adieu to two more premiership stars and now, it seems, this golden era of Hawthorn success. Shockingly, after going 3-1, that’s now 11 from 12 losses from there on. Before they get to tough off-season decisions, the Hawks will have one last crack at a win against the Suns.

Stop, stop! They’re already dead! Someone better get the word out to the Eagles next week, before they do something seriously nasty to this kangaroo carcass. To make matters worse, the Crows have won three on the bounce, which makes the Kangaroos, as of now, the clear worst team in the competition.