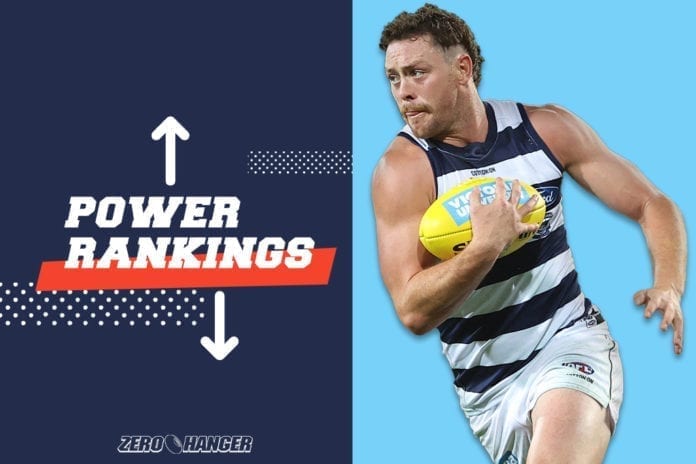 We have a new leader, but the real team to watch is the reigning premiers. And with another footy marathon right around the corner, buckle up for a wild end to the race for the finals.

Where does your team stand after Round 14?

For most other teams, it would have been game over at quarter time, but the Cats showed why they’re a premiership contender, clawing their way back to a hard-fought 11-point win. Those last three quarters were seriously impressive, but the Cats won’t want to give a team like the Bulldogs a six-goal head start in the finals.

The Tigers are starting to look very, very scary – they picked off the form team in the comp with startling ease in the second half of Thursday’s game. Top four is still not a lock, but on that form, they might not need a second chance come finals.

We’re not sounding the alarm bells on the Eagles at all after Thursday night. It was a four day turnaround, on the back of a long flight, against a very good team. They still have to prove themselves away from home, and especially in Queensland, if that’s where the bulk of the finals will be played. A loss to Essendon and we might have to break the glass.

A very comfortable win for the Power, although the Swans did push them in the second half. Top two is there’s to lose from here out, with another comfortable assignment against the Kangaroos up next. But we’d still pick the top three teams in our Power Rankings in a crunch final against them, which is why they’re still only fourth. Still plenty of time to prove the doubters wrong.

The Lions had the bye, so it’s obviously unfair they’ve fallen a few places. But what we saw from some of their closest rivals – Richmond, especially – means we couldn’t help but move them past Brisbane. They also haven’t been super impressive as of late. A huge Friday night against Collingwood awaits.

There’s some serious light at the end of the tunnel for the Pies, who have now surged back into the top six after their big win over their arch rivals Carlton. They’ll be hoping for at least one top six scalp out of Brisbane and Port to close out the season – win both and they’ll look like a contender again.

That was a huge, timely win for the Demons against the Saints on Saturday night. For once, they were super efficient in converting their forward 50 chances, thanks in large part to the continued brilliance of Christian Petracca. With no top eight opponents left (although still some tough games), the Demons are well-placed for an assault on the finals.

Ouch. Another close loss – that’s their fourth by six points or less, and if they had dared to dream of top four a few weeks ago, that door is well and truly closed now. Even the finals aren’t guaranteed anymore – if GWS are going to come in, someone will have to fall out. With that in mind, their final game against the Giants could be an early elimination final.

On paper, that was just about a tick for the Dogs, taking it right up to a red-hot Cats side. But after a six-goal head start, they would have expected to get the job done and make a place in the top eight their own. Now, the odds are probably against them, with Melbourne and the Giants both having a game on them. Their average percentage won’t help them either.

Just when they needed it, the Giants served up close to their most complete performance for the season. A win against the Dockers was far from a foregone conclusion but the Giants made it look one early in the game. Still plenty to do in the last four games of the season, but that’s one giant step in the right direction.

Bombers fans were ready to riot at half time – by the final siren, they were still making a lot of noise, but for very different reasons. An incredible 52-point turnaround was capped by the sensational return of Joe Daniher, who kicked 3.3 while hauling down 10 marks. It’s a tough, tough run home from here, but the Bombers are still well in the hunt.

That could be curtains on the Blues’ finals dream. If it is, the Pies running over the top of them in the second half will hurt even more. They probably need to be perfect from here, although it’s not beyond the realms of possibility – the Giants, Swans, Crows and Lions await.

For a side that’s been competitive all year, that was just about the Dockers’ most disappointing showing of the season. Their usually stingy defence collapsed under the weight of the Giants’ all-round domination, conceding a season-high 91 points on the way to their biggest losing margin. Time to draw a line through any faint finals hopes they might have had.

Finally, the Suns were able to take out some of their frustration from recent weeks to run up big winners against the hopeless Kangaroos. They could have pushed well into triple digits if they’d kicked straight, but there can’t be too many other complaints about a comprehensive 10-goal win.

The scoreboard mightn’t have showed it, but the Power didn’t have it all their own way on Saturday afternoon. The Swans were much more spirited than their lifeless display against the Dockers just last week. Bottom four awaits, but the Swans might be able to claim at least one more scalp before the season is out.

Yikes. In a rough year, that second half was about as low as the Hawks have fallen. After a scintillating start, the Hawks were killed everywhere, especially in the middle, where they lost 20 out of 26 clearances as the Bombers roared back. Rock bottom isn’t quite yet – that’s waiting if they lose to Adelaide on Tuesday night.

Gee, the Kangaroos are lucky the Crows haven’t won a game. Otherwise they would be the undisputed worst team in the comp. They made a team who last won seven games ago look like worldbeaters. Not much else to say except that the end of the season can’t come quickly enough.

The Crows had the bye this round, so at least they’re not 0-14 just yet. And if they do beat the Hawks, expect them to finally pull themselves off the bottom of our Power Rankings – the Kangaroos have been knocking down their door these last few weeks.