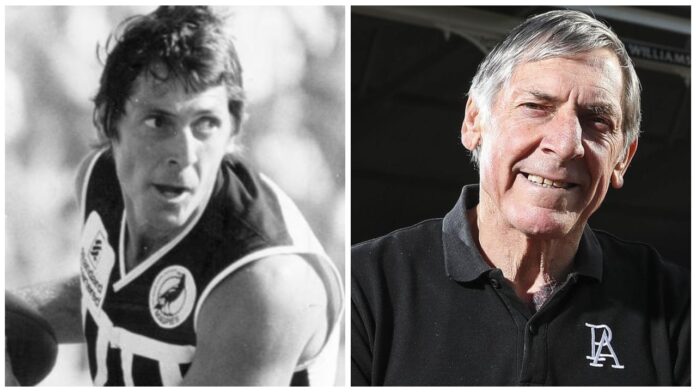 Long seen as a legendary figure in and around Alberton, former Port Adelaide champion Russell Ebert's star has risen again after being elevated to legend status in the South Australian Sports Hall of Fame.

Ebert, 72, began life in the regional town of Berri before shifting to the 'big smoke' to commence a glittering playing career that spanned across three-decades.

While the four-time Magarey Medallist will forever be linked with the Port Adelaide Football Club after pulling on the prison bars for 392-games, the midfielder also has Victorian links having spent a season with North Melbourne in the late 70s.

Despite this latest award, Ebert's collection of three SANFL premierships, six club best and fairest wins, a Jack Oatey Medal, and the collection of 29 state guernsey already saw him sit in rare air within the state before Thursday's announcement.

The news of Ebert's elevation was announced to the Power's plethora of members via an official statement on the club's website.

Despite the honour being one that was not only richly deserved, but also overdue, the humble champion explained that the latest adornment for his already stacked mantel didn't sit all too well with him.

“I’m uncomfortable being elevated above others, but I honestly believe this is about the contribution of my family, the club and community that have contributed along the way,” Ebert said.

“These types of awards are for everyone no matter what small or large part they have played and so I thank everyone for their contribution to my journey and in this acknowledgment. They all deserve a piece of the acknowledgment for themselves.”

After tallying more than 450 games of senior football across 18 seasons of action, Ebert now becomes just the seventh athlete to be elevated to such heights, following names such as Sir Donald Bradman, Bart Cummings, and Anna Meares to the South Australian sporting summit.

The midfielder was also an inaugural inductee into the Australian Football Hall of Fame in 1996.

While Ebert never added teal to his black and white stripes, his son Brett (166 games) and his nephew Brad (184) served Port's AFL side with aplomb after following in his footballing footsteps.

Sadly, this uplifting piece comes in the wake of news that the superstar had been diagnosed with leukemia in June of this year.