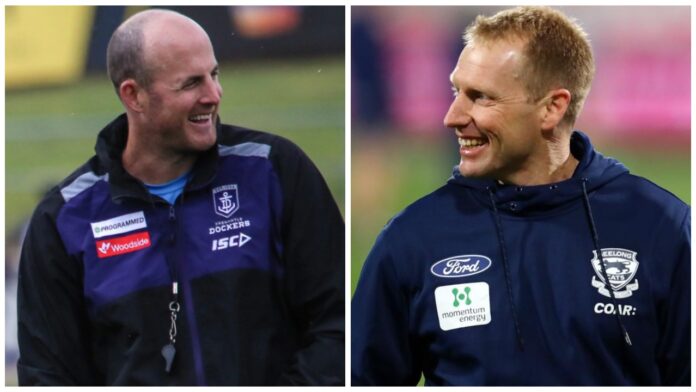 Former Fremantle assistant coach David Hale is for a homecoming at Hawthorn next season, while Matthew Knights will trade his post at the Cats for another at the Eagles.

Following his playing days with the Kangaroos and Hawks, Hale spent six-seasons in the Dockers' coaching box, but has opted to form part of his former teammate Sam Mitchell's coaching panel in 2022.

In a statement released by Fremantle on Monday afternoon, the club's general manager of football Peter Bell stated that he understood Hale's decision to return home.

“David’s been a really valued member of our coaching team, performing a variety of roles within his six years. The last couple of years, he’s been responsible for our forwards and also ball movement and had a real impact performing in that role,” Bell said.

“We’ve had an ongoing dialogue with David about broadening his coaching experience and as such, we had an understanding that at the appropriate time, if an opportunity came up for him at another club, then we’d be really supportive of him exploring those possibilities.

“As it’s eventuated, he has had that opportunity with Hawthorn, a club that he knows well and will work under a senior coach that he has a very close relationship with.

“It is with our support that we farewell him from Fremantle and we’re really excited for the opportunity that lies ahead for David, as well as his wife Teresa and their three children.”

Hawthorn also released a brief announcement, with the Hawks' head of football Rob McCartney welcoming the triple-premiership player back to the fold at Waverley Park.

“David obviously had an outstanding playing career which he has then gone on to complement with six years’ worth of valuable coaching experience at Fremantle,” McCartney said.

“Through meeting with David a number of times, we’ve become acutely aware that we’re bringing in someone with a very strong understanding of the game and someone who knows how to get the best out of his players.

“We’re really looking forward to seeing the impact that David can have on our playing group as well as our broader football department.”

Hale will join another name familiar with the brown and gold club in Andy Collins next season, with the pair set to work with Mitchell, Chris Newman and fellow newcomer Adrian Hickmott in developmental and coaching capacities.

Meanwhile, long-term Geelong assistant Knights will depart Kardinia Park to begin life with the West Coast Eagles in a role beside Adam Simpson, per reports from The Herald Sun.

The Cats' former midfield coach, could become the first of many names to head for the exit in Corio, with CEO Brian Cook and head coach Chris Scott both linked with shifts to Princes Park.

The Richmond legend had previously been charged with leading Geelong's VFL side following his three-season stint in the top job at Essendon.