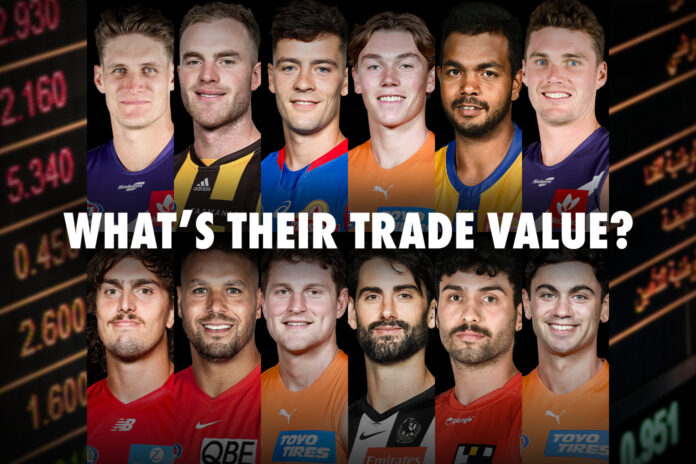 We're less than a month away from the AFL's sign and trade period, and while we have five enticing matches still staged for the remainder of the 2022 season, plenty of attention is being drawn to anticipated off-season moves.

Several key figures in this year's exchange period have already nominated their ideal destinations for next season, while it seems new faces are emerging as potential trade options with each passing day.

Ahead of what is touted to be the busiest trade window in the league's history, we've narrowed the list of potential departures to 12 of the biggest names linked to new homes for 2023, assessing their value on the trade table and the likely packages that might get a deal over the line.

Here are the draft trade deals that could be pivotal to this off-season...

There's perhaps no player that holds greater value than Jackson among those tied to this year's sign and trade period.

The 20-year-old has been prolific for the Demons across three seasons in red and blue, a stint that includes a fundamental role in the club's drought-breaking premiership run last year.

Boasting the ability to play forward, behind the ball and serve as a first-string ruckman for the years to come is sure to have Fremantle fans salivating.

While the Dockers and their faithful are already rubbing their hands at the thought of Jackson and Sean Darcy pairing in purple next year, there is a long road ahead before the long-haired Demon land at Cockburn.

Melbourne will demand a war chest in return for their prize youngster, a request that will come as no surprise.

Holding just one draft pick among the first 70 selections for this year's draft, you can expect Fremantle to part ways with their first-round selection to acquire Jackson. But it won't stop there.

Their future first-round will also be needed in negotiations, with that selection likely to range in the 14-18 mark in its respective draft.

The pair of picks may be enough to persuade the Demons, but should the Dockers acquire further selections from one of several potentially departing players, Melbourne may be asking for more than two first-round picks.