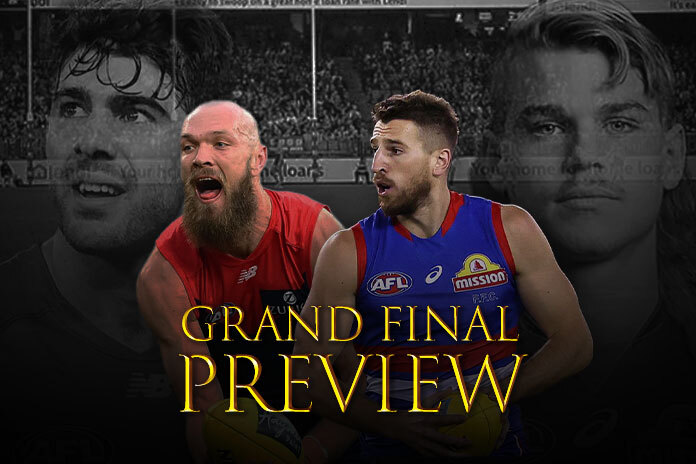 The best two teams of the AFL season have made it to the final dance and will battle for the chance to call themselves premiers of the 2021 season.

The Demons have been the best team all year and were rightful minor premiers at the end of the home and away season. Their incredible season came off the back of one of, if not the game's most formidable defence.

Moving the ball against Melbourne is a dour and grim task. They defend as an 18-man defence and when they turn the ball over they hit their opposition on the rebound.

The Bulldogs have managed to turn their end of season form around at the drop of a hat. After losing three in a row to end the season and drop out of the top 4, the Bulldogs entered the elimination final against Essendon looking quite vulnerable.

They dismantled Essendon with ease before they were able to dismiss Brisbane in an instant classic at the GABBA. Their preliminary final demolition of Port Adelaide at the Adelaide Oval showed that they were still in the top 2 seeds in the competition.

Both teams dominated their opponents in the penultimate games of the season, showing they are head and shoulders above the rest.

The Western Bulldogs have had to make the brutal call to omit defender Ryan Gardner for the returning Alex Keath. Garnder was brilliant in the absence of Keath but has made way with Zayne Cordy holding down the second key defender slot.

The Bulldogs also welcome back livewire forward Cody Weightman who missed the preliminary final with concussion. Weightman has had a brilliant finals series scoring five goals in two games.

Laitham Vandermeer has gone out of the side as well as medical sub Anthony Scott.

Melbourne have omitted James Jordan who was the medical sub in the preliminary final. He is listed as an emergency and may fulfil that role yet again this weekend.

The small forward battle is a massive one in this weekends decider. Weightman comes back in for the Dogs while Kysaiah Pickett has lit up the competition all season long.

Kozzy Pickett and Cody Weightman are two of the most electrifying players in the comp already - can't believe it's only year two for these guys!

Who are you taking out of the two young guns? pic.twitter.com/3nljsCjb4T

Weightman's five goals from two finals so far have been mighty impressive and his ability to fly and clunk marks as well as be dangerous at ground level makes him a horrifying matchup.

Pickett is lively and clinical and is somewhat of a barometer for the Demons forward line. When he is up and about their forward line is just about unstoppable.

Josh Schache was excellent when nullifying Allir Allir in the prelim' and will be tasked with a similar role on All-Australian Jake Lever you would suspect.

The former number 2 draft pick has re-found himself in a role that could prove vital to deciding who wins the game. He is also a lovely kick for goal so when gets a chance to hit the scoreboard he usually takes it.

The midfield battle is always important but there is so much star power it may just about cancel each other out. But in a Grand Final, nothing is more important than the contest and the ability to win the first ball.

Tom Liberatore and Jack Viney will be hugely important for their teams and might be the ones who slide under the radar. Both have been huge this finals series and were keys to their sides preliminary final wins.

Whoever can give their side first access to the footy will take their team a long way to premiership glory.

Before Liberatore or Viney get their hands on the ball though, Max Gawn and Stefan Martin will get their chance to do battle. Gawn played arguably the greatest quarter of finals football in modern-day history in the 3rd term of the preliminary final.

He finished that game with five goals and was having a field day at the expense of the Geelong ruckmen.

The key to this matchup won't be whether Martin can get the better of Gawn, but whether he can nullify the impact of the Melbourne skipper. Martin will have support from Tim English in an attempt to stop Gawn's ascendency and influence on the game.

The stats you need to know

There's a pair of key stats that you can hardly split these two sides on that show why they are so good. The Western Bulldogs are third and Melbourne fourth for scores from opposition turnovers.

The Bulldogs average 55 points a game while Melbourne sits at 52.9 per game. Meaning when they can force the opposition into a mistake, they are able to make it count going the other way.

On the flip side of that though, is the fact that both teams are very good at transitioning into defence after they turn the ball over. The Bulldogs sit at 38.8 points against from turnover while the Demons are 17th at 37.6 points per game.

Both sides are incredibly good at switching from offence to defence and stopping the opposition. The turnover game looms as the key battle, whoever can get the better of the turnover game will be very hard to beat.

Where it will be won?

As mentioned above, while the midfield battle will be important, there is almost too many stars for one midfield to dominate the other.

The more likely area that will have a clear winner and loser will be the Melbourne forward line. The Bulldogs have one clear weakness and that's their defence. What they do really well is cover that with brilliant team defence.

If Melbourne can expose the Dogs defence and get some good one-on-one looks they may be able to get ahold of the Bulldogs.

Hard to see the Demons not lifting the cup. They have had a fair gap between runs having only played two games in five weeks but if the game is tight late, that may prove a blessing.

What else you need to know