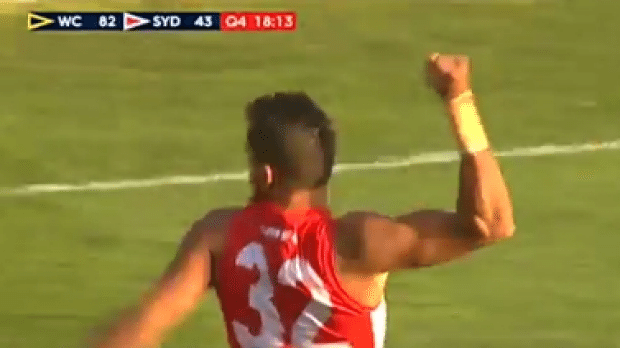 “I think when you have Lewis Jetta’s father calling me – this is having an impact on people beyond Adam Goodes,” McLachlan said on Monday.

McLachlan said he is unsure if the booing is an issue of racism.

“I think it’s a complicated question and I am not avoiding it but I don’t think I have a clear view about what it is,” he said.

“There has obviously been a campaign for some months now against one player and the booing has been going on for some time against Adam Goodes. I think we are at the stage that people don’t know why they are doing it. It’s obviously hurting Adam and it’s hurting a lot of people in our industry.

“The war dance … was created by the under-16 indigenous team.

“It reflects an expression of pride in their culture and a commitment to each other.

“It was done by Adam Goodes, in Indigenous Round, which is a round where we celebrate the extraordinary contribution our indigenous players have made to our game and the players themselves get to celebrate their own culture, and that’s what Adam did.

“There comes a point where [we need to call out this behaviour] and go ‘enough’s enough’. It is draining on Adam,” he said.