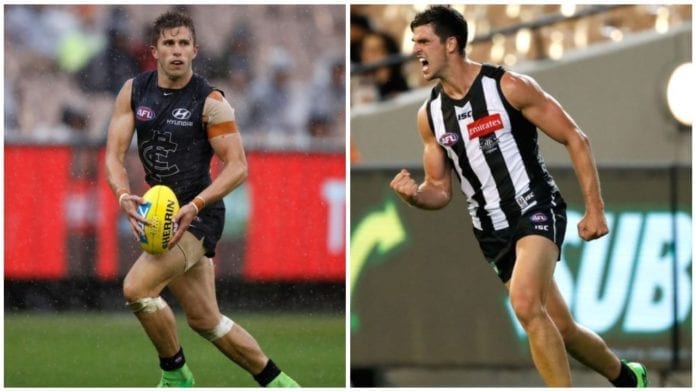 Former Richmond great Matthew Richardson has re-drafted the top 10 picks of the 2005 draft on Sportsday.

Topping Richo’s re-draft list is Scott Pendlebury. The premiership Magpie has played played 302 games and is a Norm-Smith medallist, six-time All-Australian and a five-time Copeland medallist.

“I think it’s clear that Scott Pendlebury (is number one). Unbelievably for Pendlebury, 14 completed seasons, 10 of those seasons he’s been at least in the squad of 40 for the All-Australian team, that is just incredible.” Richardson said.

With pick two, Richo opted for West Coast star forward Josh Kennedy. Kennedy, a premiership winner in 2018 with the Eagles, has played 244 games and kicked 611 goals with two Coleman Medals to his name.

“Josh Kennedy will probably end up kicking over 800 goals. What a trade that was, Judd for Kennedy.”

At number three, Richo went with the original number one pick, Carlton’s Marc Murphy. Murphy has played 269 games for the Blues and has been a key figure in their midfield since his arrival.

“He was the number one pick, but drops down to number three and there’s no shame in that because of the two players ahead of him.”

Richo apologised for leaving Bernie Vince, Andrew Swallow and Richard Douglas off the list. But may have unknowingly missed someone bigger – Brownlow Medallist Matt Priddis, who went at pick 31 in the rookie draft.