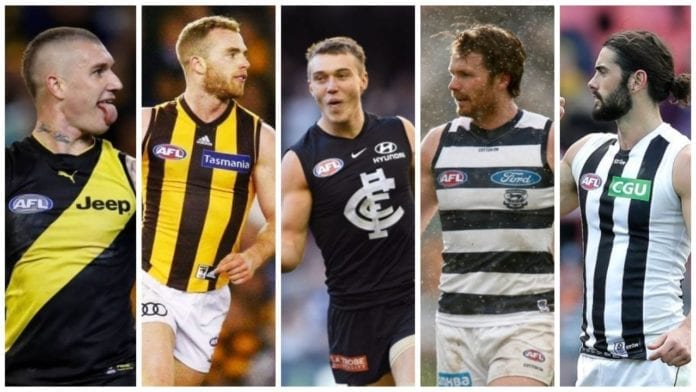 Player agent and former Geelong player Liam Pickering was tasked with creating an 18-man side from players drafted between 2001 and 2018, with a catch.

Pickering is limited to selecting one player per draft class between the pool of current players in the league, meaning only one of Dustin Martin, Nat Fyfe and Max Gawn can be selected from the 2009 class for example.

Pickering found some frustrations from the task as he was limited to selecting from his own players while finding the best 18 names.

“There’ll be some controversy” Pickering said on The Oval Office. “I’ve had to remove my guys, outside of Gazza (Gary Ablett jr.), cos Gazza’s the only one from ’01 that’s still playing.”

Houli, selected by Essendon in 2006, was given the nod ahead of Joel Selwood, Travis Boak, Jack Riewoldt and Josh P. Kennedy

“They’re in positions, we can’t have 18 midfielders,” Pickering added. “In hindsight, I would have gone with Shannon Hurn.”

See Pickering’s side below…