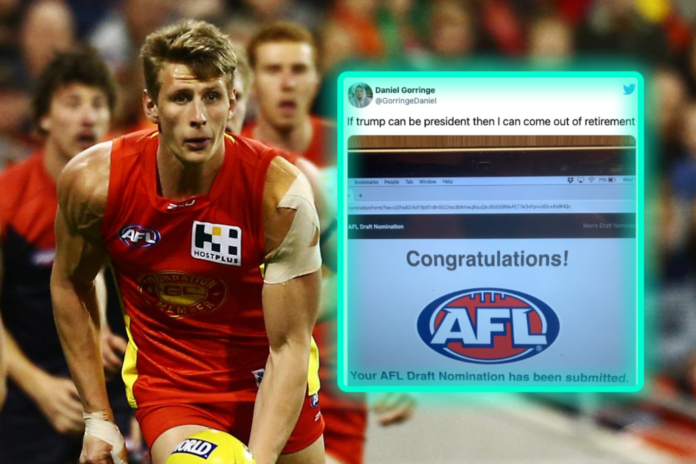 Former Gold Coast No.10 pick and Big Brother star Daniel Gorringe has explained the legitimacy behind his nomination for the mid-season rookie draft.

SEE THE FULL LIST OF OVER 300 PLAYERS TO NOMINATE FOR THE MID-SEASON DRAFT HERE.

Gorringe played 22 games across five seasons with Gold Coast, before moving to Carlton where he played four before retiring in 2016.

The 28-year old’s career was marred by injury, suffering achilles and knee issues throughout his time in the game.

Speaking to the Herald Sun after his nomination, Gorringe conceded that the chances of being picked up were low.

“I know a lot of mates probably think I am taking the mickey but it’s something I want to do,” he said.

“I have kept fit the whole time and if you are looking at someone who knows senior footy and knows how game plans work I could be a handy pick up on a list for half a year as back-up.

Chase your dreams kids, no matter how crazy they seem to others https://t.co/KSnyCqLicf

“I signed at Powelltown and before that I was at Wandin and Park Orchards. It’s been funny to think my career took off (with Big Brother) after footy but it’s been a great ride.

“When I was in the system I enjoyed it but I probably took my footy too seriously, I came out and can see the lighter side of things so having fun with my footy and life in general has been great.

“I certainly won’t be waiting by the phone. But there might be a club out there who believes I can play a role.”

Following his footy career, Gorringe starred in the 2020 edition of Big Brother, where he came third.

Gorringe has earned an impressive social media following, thanks to his Instagram and Twitter posts revealing insights into his time in the game.

Gorringe currently plays for Powelltown Football Club in the Yarra Valley Mountain District League. He also nominated for the 2020 AFL draft, where he wasn’t picked up.

If trump can be president then I can come out of retirement pic.twitter.com/EEgC7LeTt7