As we enter the second week of finals, The Arc has mapped out the percentage breakdown of how each team’s season will end based on 25,000 simulations.

West Coast’s most likely outcome is losing its semi final clash against Geelong at the MCG this Friday night.

The Cats are being tipped to lose its preliminary clash against the Tigers next week, which would send Richmond into the grand final.

On the other bracket, The Arc predicts that the Giants will go down to Brisbane in this Saturday night’s second semi final at the Gabba.

However, the Lions most likely outcome is a loss to Collingwood the following week, setting up a massive Pies-Tigers decider.

The Arc gives Richmond (34 per cent) a slightly better chance of winning the grand final than Collingwood (31 per cent).

Here is the full percentage breakdown of how every finalist’s season will end: 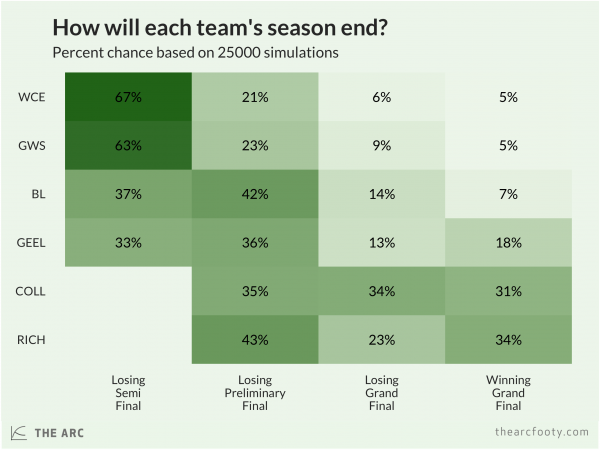 Report: Robbie Gray pulls out of State of Origin