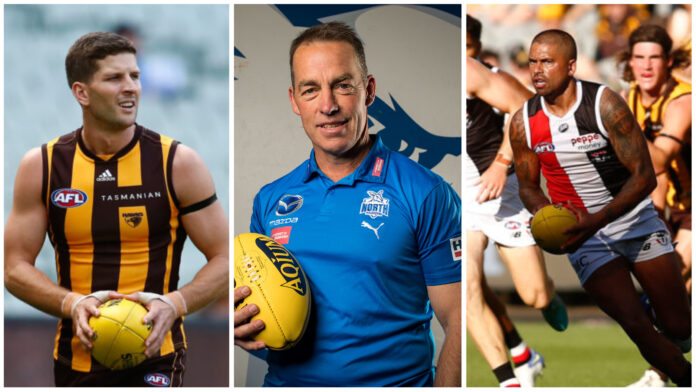 North Melbourne's huge appointment of Alastair Clarkson as their head coach could be the sign of multiple changes in personnel at the Kangaroos.

Clarkson was unveiled as the new coach of the struggling club after many weeks of speculation that the four-time premiership coach would either join Essendon, North Melbourne or GWS.

Clarkson's appointment follows another poor season for North as they have slumped to the last position on the AFL ladder and have been accused by many of completely bottoming out.

Only hours after the unveiling of Clarkson, there has been much discussion on the changes that the former Hawks senior coach will bring to Arden street. Multiple ex-Hawthorn players have been linked to moves to Arden street to reunite with Clarkson in an attempt to turn the club's fortune around.

Clarkson seems to be wanting to leave no stone unturned in this rebuild, stating at his first press conference today that the Roos will be proactive in in their approach to the off-season's echnage windows.

"We’ll explore draft, trade and free agency mechanisms, but by and large we’ll get better with the people we have," Clarkson said.

"We have to roll up our sleeves... the brain is already ticking over."

One such name being thrown around is St Kilda veteran Brad Hill.

Hill has been linked with a trade to North to reunite with the coach he played under at Hawthorn. The Herald Sun has revealed that several North players, including Jy Simpkin, have reached out to Hill personally in regards to a potential move.

Another player who could be keen to reunite with Clarkson is Hawthorn forward Luke Breust. According to AFL Media’s Callum Twomey, Breust is “open to opportunities”, and there is a "real watch this space" on the Hawks star.

"Rivals are aware he is keen to extend his AFL career beyond 2023," Twomey said on Trade Desk.

"That could mean some clubs are willing to look at him during this trade period. I think he’d be open to the opportunities that’d be put to him over this year's trade period. This is a really interesting watch on Breust and Hawthorn’s side of things."

This could unfold in the 2022 trade period as Hawthorn focuses more on retaining young players and North Melbourne attempt to build a solid core group under Clarkson.

North Melbourne finishes their 2022 season on Saturday against the Gold Coast Suns at Marvel Stadium, however, the official coaching changeover won't happen until November 1 with inerim coach Leigh Adams to finish out the season at the helm.