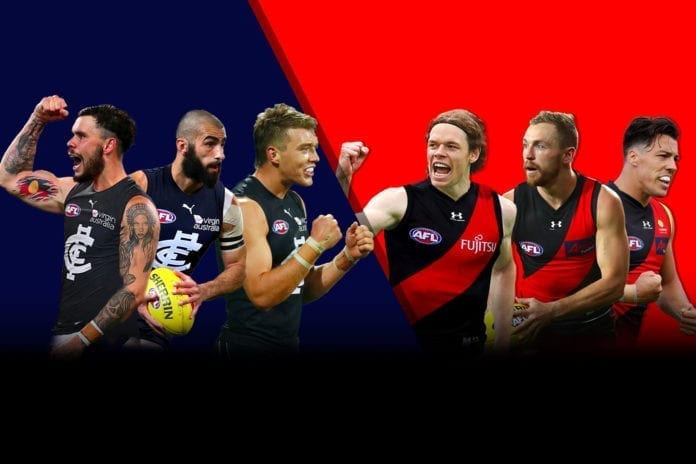 With the fleet of foot Adam Saad now set to wear a navy blue jumper next year, this storied rivalry between the league’s most successful clubs looks set to hit fever pitch.

Saad’s Tullamarine defection has already left a sour taste in the mouths of most Essendon fans, so you can be sure that when these two teams face off next year, there will be venom spat from those that don the sash.

The rebounding defender's mooted move down Mount Alexander road and across the Citylink cannot simply be seen as just another off-season trade. It is instead an iconic signifier of a shift in power between these contemporarily success starved giants.

With the Blues now seen as a 'destination club' and a beacon for the future, the same cannot be said of their rivals. The Bombers face a long off-season once again haggling at the trade table, desperately trying to retain their talent, and rapidly striving to learn and implement their new coach’s game plan.

Despite the fact that our game has never been played on paper, we’ve shifted our eyes to the future in an effort to see how these dormant powerhouses could potentially line up in round one next season.

We are certain that this will not only simultaneously raise and dash hopes, but also get a few hot under the collar.

Whether you agree or disagree, let us know where you think the magnets should really sit.

It is in this position that the two could not be more juxtaposed.

On one hand, you have Carlton – a stable team with vaunted stars and emerging young talent who began making their way up the ladder in 2020.

On the other, you have the Dons. Sure, they too have some bright spots smattered across their team list, but with Ben Rutten only beginning his tenure and many big names desperate to depart, stability is not a term one would find synonymous with the Essendon football club at the present.

You would have to be living under a rock for the past fortnight to have missed the memo that Carlton are likely to have Zac Williams and Adam Saad at their disposal next season.
Despite no ink on any lucrative contracts as of yet, we have placed them in the Blues’ 22.

Zac Williams has nominated Carlton as his club of choice.

There have already been a further myriad of names linked with the Princes Park club (something that is only set to intensify following the season’s completion), but as nothing concrete has been reported, it is just the pair of rebounding defenders that have been included.

With Joe Daniher set for a move north, Essendon has a chasm to fill in their goal square. The moustachioed full forward’s impending departure via free agency will net the Dons some compensation, However, for a club desperate to avoid developing a key forward talent, there is only one rational replacement to fill the void.

Sure, the prospect of Brown over Daniher in the goal square remains a much less sexy option, but with an average of over 61 goals in the six seasons prior to this, the man with the lengthy run up knows where the big sticks are.

Bombers fans should also remember that Brown is only 27, so should they part with the proverbial packet of Rwisties for the key forward, their frowns should turn upside down. Another option to fill Daniher's void is former Saints Pick 1 Paddy McCartin - who the Bombers have been linked to.

It must also be noted that Gold Coast youngster Will Brodie’s name has been linked with a move to the club. However, with nothing tangible tabled, we haven’t named him in our 22.

Unlike many seasons in the recent past, there aren’t any names looking to leave Carlton.

Having taken many years to adapt to the implementation of a salary cap and a socialistic draft, the Blues have finally shed their old ways and embraced the present.

The only names that will no longer be at the disposal of coach David Teague are those that have called time on their careers or those that are seen to be surplus to requirements.

We expect that the Blues’ list management team will seek to part with picks rather than players in their deals for Saad and Williams, if so, that shouldn’t interrupt the 22 at all.

On the flip side of the coin, the Bombers face a few more months of uncertainty about who will be filling their lockers.

For the majority of last year and the entirety of this, the futures of Joe Daniher and Orazio Fantasia in red and black have looked debatable at best. After both requested trades, but were denied trades last year, it seems certain that history is unlikely to repeat itself.

With Daniher likely to be a Lion and Fantasia a Crow, it leaves Rutten with a somewhat scant forward line.

Even so, we have managed to work a trio of these names into our 22 with the theory that Dodoro will be unlikely to shunt all four at the one time.

Who's on the fringe?

For a club that now boasts depth rather than desperation, there will be many Carlton players that will be forced to bide their time in the twos next year.

Placing these players outside of the predicted starting line ups doesn’t mean there is a line through them, it does however mean that they are will begin behind the eight ball.

At Essendon, the list isn’t as lengthy, yet there is talent amongst names including - Patrick Ambrose, Dylan Clarke, Tom Cutler and Matt Guelfi.

It should also be noted that you won’t find Irving Mosquito’s name included due to his ACL injury likely to have him sidelined for the majority of next year if not all of it.

Below is our predicted best 22s for each team - did we get it right?