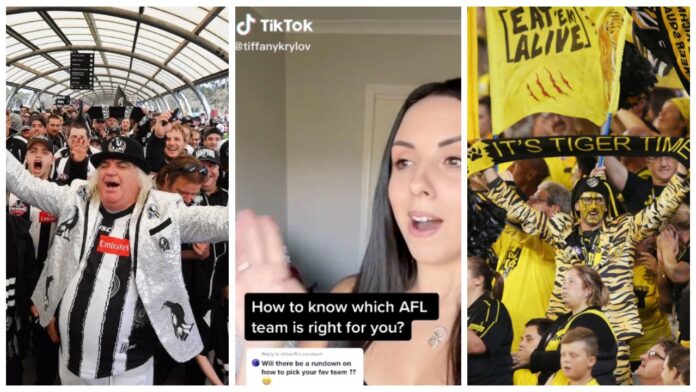 Are you still looking to pick an AFL club? You probably aren’t, but a hilarious TikTok video has provided some guidance. Well, sort of.

In reality, every AFL club’s stereotype has been given a cheeky clip in what makes for humorous viewing.

Tiffany Krylov has posted a three-part video on her TikTok, titled ‘How to know which AFL team is right for you’, taking the you know what out of each side and its fans.

In response to a TikTok user’s comment asking if there will be a run down on how to pick an AFL club, Krylov responded: “Of course there will be.

“If people haven’t picked their favourite team, I am here to help.”

Below are some of our favourite one-liners from the videos, all starting with the prefix of ‘If you’re…”

“Someone that would just love to have people despise you for your choice in team and always make fun about your teeth, Collingwood Magpies is the team for you baby!”

“A really loyal person but just love having your heart ripped out and stomped on, North Melbourne’s the way to go for you.”

Reply to @sirbert5 I mean am I wrong? 😉 Part Two is coming #afl #football #footy #aussierules

“Looking for a team that’s like consistently good to the point where they’re just boring, Geelong Cats is the team for you.”

“Someone who likes to cling to past victories with every fibre in your body, Carlton Blues are for you.”

“Someone who’s really good at having like all the life sucked from you, but every now and then just having this little glimpse of hope, and then having that extinguished, you should follow St Kilda Saints.”

“Someone who likes to just disappear off the face of the earth when your team’s being like really s**t, Hawthorn Hawks.”

“If you live in the Gold Coast, you should just support the Gold Coast Suns, because that team was just purely made for you to try and steal some rugby fans over.”

We got through them all 🙌🏼 #afl #football #footy #aussierules #australia #aussie

Krylov, who has been on the social media platform since April last year, has over 65,000 followers and 1.8 million likes.