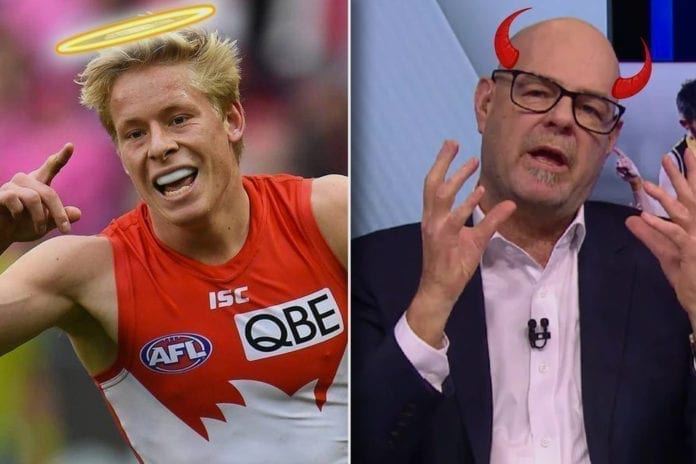 The AFL Chief Executive looked visibly sleep deprived as he announced on Sunday the competition would be shut down until at least May 31 – and the AFLW season would be abandoned. Unprecedented times call for unprecedented measures and McLachlan has done the most anyone could to lead the game so far through ever-darkening waters.

He was right to follow the best possible advice provided to him to play Round 1 before further restrictions from the state and federal levels of government forced his and the AFL’s hand. Further strong leadership will be required from McLachlan if the competition is to emerge from the next few months relatively unscathed.

We saw enough footy in Round 1 for the game’s next generation to announce their time is now. Isaac Heeney was one such emerging superstar to stamp his imprint on the weekend’s action as the lively forward took five marks and booted 4 goals in a man-of-the-match display at the Adelaide Oval.

With the Swans missing key man Lance Franklin, the 23-year-old was the hero coach John Longmire asked for, as his side held on in a thriller to win by two points.

With nearly all global sports under hiatus, the search was on for many lost fans for anything resembling live sport. Former NFL punter and sports analyst Pat McAfee got more than he bargained for when he stumbled across Fremantle’s clash with Essendon this weekend. What followed was a love story to rival anything Hollywood (or, let’s be more realistic, Channel 9) could serve up.

Watching this Aussie Rules Football.. I think it’s my favorite sport I’ve ever seen. About 6 punts a minute right now.

He quickly announced to his 1.7 million followers that his future child better expect to be “punting and punching balls all around the house.” Well, it’s a start. Who knows – maybe one day McAfee Jr will be the first American (not-7-foot-tall) to make his mark in the AFL.

The competition’s oldest player offered all middle-aged amateurs no excuses as he kicked three goals and set up another for Hawthorn debutant Jonathan Patton. The highlight of Burgoyne’s day involved him shrugging off the best efforts of Lions defender Marcus Adams to dribble the ball calmly through an open goal. It seems perhaps only COVID-19 can stop Burgoyne from reaching the 400-game milestone.

The AFL certainly left no stone unturned in their bid to safeguard the competition against the effects of COVID-19. Ground staff were shown on camera on Thursday night disinfecting the Sherrins at quarter time. While the only real way to prevent any potential spread among players would have been to convert Aussie Rules into a football-netball hybrid, kudos should still go to the grounds crew for going the extra mile in the pursuit of proper hygiene.

While they were up against the reigning premiers, Carlton again struggled to keep it close against the Tigers on Thursday night. That’s seven in a row for Richmond on opening night, and calls for the Blues to get competitive or get out will surely only intensify. But after a tumultuous 2019, David Teague must be given a fair chance of building on the side’s late-season improvements and righting the Blues’ ship back up the ladder.

One of AFL360’s Mark Robinson’s first concerns in light of the emerging pandemic was apparently whether AFL chief executive Gillon McLachlan will stay in his job. His bizarre question to the league’s boss on the Monday night program left McLachlan noticeably bemused before choosing to avoid Robinson’s query entirely. The veteran Herald Sun journalist might count himself lucky he doesn’t have an interviewer like himself to answer questions from on a weekly basis.

Fox Footy’s preseason survey of 12 experts served up three frontrunners for the flag: Richmond, West Coast and GWS. Not one expert picked the Pies, who came so close in 2018 before their tight preliminary final loss last year. If Round 1’s evidence is anything to go on, though – and, especially this season, that really is a fair question – the Pies could easily be there again come the pointy end of the finals.

Collingwood flexed their muscles against the Bulldogs on Friday night, limiting them to just 34 points in a 52-point humbling. September – or October, or even November – beware: the Pies should be there when things start to get serious.

It was an eerie sight to see some of the nation’s best stadiums almost entirely empty across the round of footy, and while the coverage crews did their best, cutaways to rows and rows of empty seats rarely made for attractive viewing.

Maybe it’s time for more stadiums to follow the lead of the Gabba and install multi-coloured seating to create the illusion people are occupying them. And while finances are understandably tight at league office right now, an investment like 100,000 blow-up dolls would certainly have made the MCG look not quite so lonely over the weekend.

If there’s any enemy all AFL fans can unite behind, it’s the pandemic sweeping the world that has forced the league into uncertain hibernation. COVID-19 was already the villain behind the league’s shortening of the fixture and quarter lengths but now it has finally added the AFL to a long list of sports suspended because of its virulent spread.