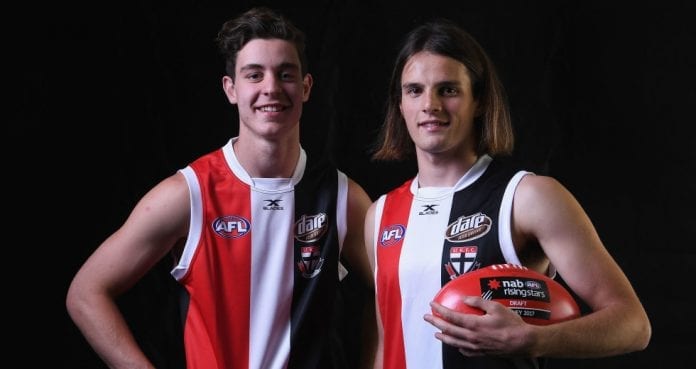 Taken at picks seven and eight in last year’s draft, the midfield duo will run out in the red, white and black on Wednesday night against Carlton in the JLT Community Series, with Dunstan excited by their future at the club.

“(Clark) is a very hard man to tackle.

“It’s going to be exciting to see them get their first crack in the Saints jumper.”

Dunstan discussed his own 2017 season which saw him dropped several times from the senior side.

“I put a lot of it down to playing on instinct,” said the 23-year-old

“I think because we get coached too much and told to do so much, you can lose what you did as a youngster and growing up and playing on instinct.

“I felt when I went back to VFL level, I was able to find that again and just go out and have fun. I think I have finally started to nail my prep and what I actually need to do going in to a game.

“It’s strange that it might take four years to do that but I think I have finally nailed that. Hopefully the consistency will come this year.”

What we learnt from the first weekend of the Marsh Community...

King says Petracca will go past De Goey in 2020