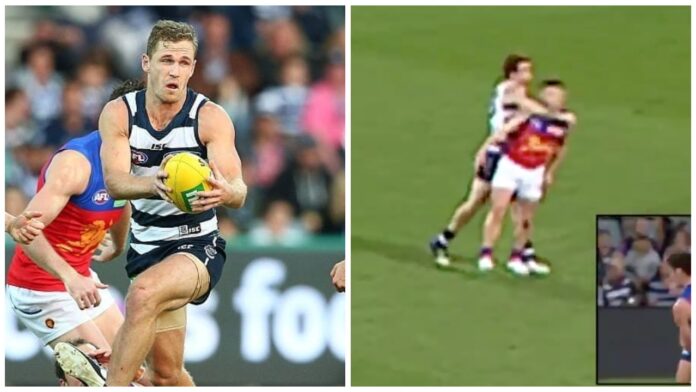 Geelong forward Gary Rohan has been handed a two-game suspension by the Match Review Officer after striking Brisbane star Lachie Neale during the Cats' one-point victory over Brisbane on Friday night.

In an off-the-ball altercation, both Rohan and Neale exchanged blows, with the latter falling to the ground after Rohan's swinging arm made high contact.

Lachie put three fingers up after Gary Rohan hit him behind play 😂 pic.twitter.com/qzE0jPlxrq

Rohan was not reported for the incident, but was found guilty of intentional, medium impact and high contact by MRO Michael Christian for the strike.

Meanwhile, Geelong captain Joel Selwood could also find himself facing the MRO this week after a dangerous tackle on Lions youngster Tom Berry.

With play stopped, Selwood tackled a limp Berry to the ground and was penalised with a 50m penalty.

Joel Selwood gave away 50 for a dangerous tackle 😳 pic.twitter.com/rYL7OEw9iI

Despite Berry going unharmed in the tackle, former St Kilda star Nick Dal Santo said Selwood took a "free shot" on Lions midfielder and could be in some trouble.

"That was a free shot and if you look at that vision again from the second angle, there is a moment where Joel Selwood sees the umpire in his vision and carries on,” Dal Santo said on Fox Footy’s First Crack.

“Whether that tackle is in play or not in play, or whether Joel Selwood knew or didn’t know – you still can’t tackle like that.

“It’d be a fine, I’d say a warning. Something to say you can’t do that, but you’re not getting a week for it."

The pair of incidents follow a three-match suspension handed to Cats superstar Patrick Dangerfield earlier this week, who was sent straight to the tribunal for a bump on Adelaide defender Jake Kelly.