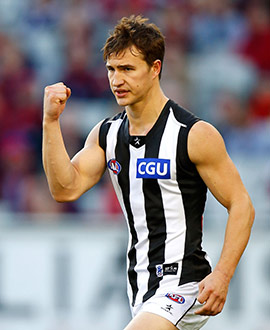 Former Collingwood midfielder Kyle Martin has continued his decorated local football career, chalking up a 13th best and fairest honour from his past 14 seasons.

The 32-year-old's honours spree started with Haileybury College 14 years ago before winning his first with Noble Park the year after.

Since then, Martin has notched up best and fairest awards with VFL outfits Frankston (2012) and Collingwood (2013, 2014), with the latter coming in Martin's two AFL-listed years with the Magpies.

Injury would see Martin miss out on his chances in 2010, while local footy was scrapped across Victoria due to the COVID pandemic.

Martin managed just the six games at AFL level, making his debut against Brisbane in 2013.

After leaving Collingwood Martin returned to Noble Park and has remained at the Eastern Football League since to continue his streak of club honours.

Martin's CV has him placed as arguably the state's greater local football player, and has only continued to strengthen his bid for the label in 2022.

The Bulls midfielder was recognised in the EFNL's Team of the Year and was named captain of the side.

Martin was also handed a Life Membership with Noble Park this week.