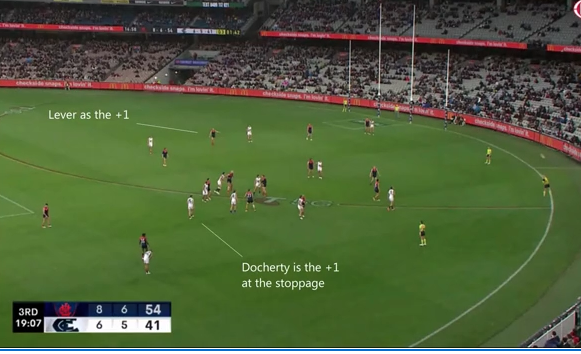 Melbourne defeated Carlton by 26 points on the weekend and never really looked like losing after quarter time. The main reason for that and the reason the Demons are still unbeaten is their strong defensive structure.

Currently, Melbourne average the least points against in the AFL at 62.2 – well lower than the second placed Bulldogs at 67.4 points per game. They are also first in the competition for least opposition scores per inside 50%.

They structure up incredibly well behind the ball led by May and Lever (#8) and play with a great sense of connection and cohesion. Melbourne’s defenders are terrific at identifying which one of them will fly for the ball and which defender will engage their opponent and put in body work to place them out of position – making them unable to impact the contest.

Lever as the +1 in this example uses his body position on Stocker to allow May to mark the ball unimpeded.

On the weekend, Carlton allowed Melbourne to generate a plus one (loose man) behind the ball (Lever). In exchange for allowing this, Carlton is able to play with an extra midfielder/forward at the stoppage.

Carlton failed to make good use of that extra player around the ball.

When a team has a plus one at stoppages, it is imperative that the team is smart with their ball use and not rushed. Yet, when the pressure around the ball is high (as it has been with Melbourne all year) – this makes it easier said than done. But to rush kick forward is playing into Melbourne’s hands when they generate the loose with Jake Lever.

It allows Melbourne to counter attack off an intercept mark and score in transition or kill any chance of a forward 50 mark. Look at how in the example below, Docherty (#15) is the plus one at the stoppage. He gets involved in the contest and it results in a forward 50 entry – which is a good result!

READ MORE: Is Cripps close to re-signing with the Blues?

Yet, Lever as the plus one impacts the ball coming in:

Lever had arguably a best on ground performance with five intercept marks (10 intercept possessions) and seven spoils to go alongside his 12 disposals and 85.7% kicking efficiency.

So isn’t the answer to just not allow Melbourne to generate a plus one?

Melbourne’s balance within their team makes them hard to match up with. If you let them generate a plus one behind the ball, they have the pressure at the source of the ball (No. 1 team for post clearance contested possessions) and the intercepting players in Lever and May to dictate the game on their terms and cut off scoring drives like on the weekend.

If you man up that plus one defender, Melbourne has a strong midfield brigade in Petracca, Oliver, Viney/Harmes, Jordon (who is quickly becoming if not already Melbourne’s best defensive midfielder) alongside Gawn and Jackson to beat you around the ball.

Teague said after the game that they allowed Melbourne to generate a plus one but had plans for it to be someone other than Lever and sit someone on him (Cunningham and then Owies). It was great for their contest – they won the clearance count by 15!

But because Melbourne applied enough forward half and midfield pressure, much of that dominance at the clearances resulted in quick kicks forward to Lever.

What about when Carlton decided to man up on Lever? Carlton at times played the much smaller Owies on Lever – an interesting and somewhat confusing tactic. To counteract an intercepting player like Lever, a team would usually use a similar sized player who can be dangerous leading up to the ball to force Lever to respect that lead and not zone off – something he has done all year.

Sometimes, you can play a small on Lever to punish him when he makes the wrong decision to fly. It worked early when Owies gave a little nudge to Lever who mistakenly flew – Owies was able to kick the first goal of the day for Carlton.

But Lever doesn’t make nearly as many mistakes as he used to. After this? It was mostly these kinds of situations:

Carlton allowed Melbourne to play the game on their terms – Goodwin after the game stating that he was fine losing the clearance count by such a large margin because it allowed them to set up the way they want to.

Against the best teams it won’t be this easy – a team that has used a plus one at the stoppage a number of times this year and has punished teams is the Bulldogs. Because the Bulldogs work through pressurised situations with handballs and kick once in space with time – it makes a plus one behind the football less impactful.

FEATURE: Former Bulldog opens up on loss of love for football

The Bulldogs game in two weeks will be Melbourne’s biggest challenge – to see whether such a tactic can hold up against the contrasting attacking style of the Bulldogs.