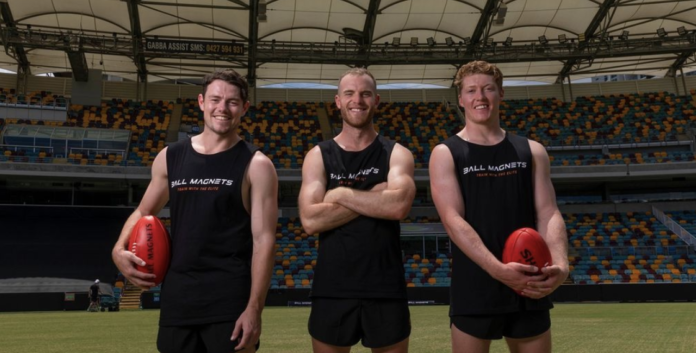 Have you ever wanted to accumulate the Sherrin like Tom Mitchell or dominate consistently like Erin Phillips?

Well now you can, with the Ball Magnets training app.

Mitchell and Phillips have combined with fellow superstars Patrick Cripps, Lachie Neale and  Gold Coast Sun Matt Rowell to launch the revolutionary program, designed “to educate and inspire young players to find their edge and love the game.”

The quintet – sans Phillips – spoke on the Dyl and Friends podcast about their collective ethos and aim.

“The boys got together in March last year, and we sort of came up with the concept of what would we love as kids to improve our footy,” Mitchell said.

“You sort of look up to your idols when you’re a bit younger and we sort of wanted to create something that we would have loved if we were ourselves in those shoes again.

“It was probably inspired a little bit through COVID, where kids had no training or footy games to play, so we thought how could we contribute and give back and share our knowledge, as well as give some tips and things away that we don’t normally give and share some secrets, not just the stock standard media answers that you get.”

Although designed by some of the game’s most elite players, Cripps explained that the content was not designed for their peers.

“We want to help the younger generation come through, learn the skills, get better basically and get out with mates and practice these things.”

Despite playing just six games of AFL football, and still sitting two months shy of his twentieth birthday, Matt Rowell’s footballing IQ is as impressive as any youngster to enter the competition in recent years.

The former number one draft pick stressed the value of mastering the fundamentals of the game when aiming to reach his own heights.

“It [the app] gives good insights into what we really value in the game,” Rowell said

“I think a lot of the ball work and the touch work is really good and really important. We all do a lot of it at our clubs and I don’t think you can do enough of it as a kid growing up.

“I know when I was a kid I did a lot of that and I think it has put me in good stead in my career.”

Mitchell explained that although these fundamentals were something the app would help hone, the 2018 Brownlow medallist stated that mental skills and application were arguably more important.

“There is the skills, which is the really obvious stuff, but being able to read the game is so important because you are just a step ahead,” the Hawthorn midfielder said.

“I think we want to teach some intuition to the game and how to read it.

“Obviously it’s the work that they [Neale, Cripps and Rowell] put in and the skills, but it’s the knowledge and I think we want to share that knowledge rather than give the stock standard, straight bat answers and share some secrets.”

The Carlton co-captain also explained that helping the next generation of footballers build their bodies and work on their fitness was also a major focus of his and AFLW star, Erin Phillips.

“There’s also the strength and conditioning side, I know Erin Phillips has done a lot of work on that too,” Cripps said.

“She [Phillips] has been the best AFLW player in the game over the last three years. I think we will even learn a bit off her, especially with her sporting background.”

The syndicate’s app, which is now live, is described as being ‘more than just a regular fitness training app’ and consists of ‘two unique 15-minute training sessions each week, plus game-sense insights, session archives and challenges.’

The fitness programs have also been designed so they can be completed in a group or as an individual.