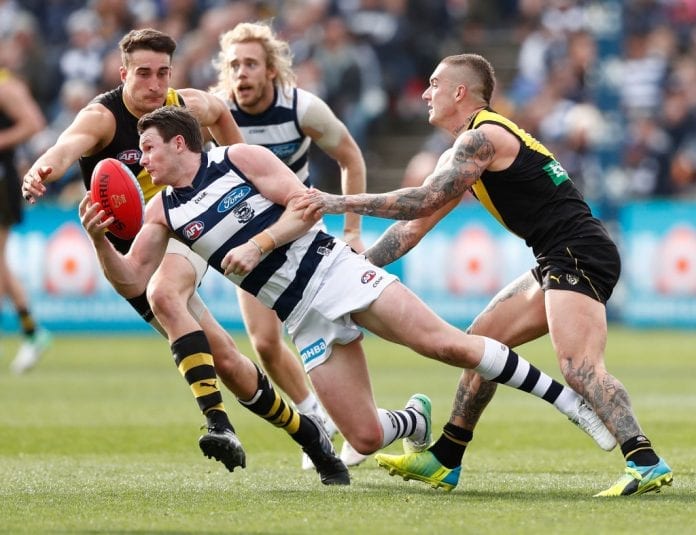 1. The Tigers will be hoping they don’t play Geelong in the finals

Heading into Saturday’s game, the Tigers were full of confidence. They had won four games in a row and were fielding a close to full strength side. Geelong on the other hand were coming off a demeaning loss to Sydney and had a number of major outs.

If Richmond cannot beat the Cats when they are without Duncan, Hawkins, Selwood, Blicavs and Cockatoo, what chance are they when some if not all of them return. By no means was it a great performance from the Tigers, however, it still would appear to be an uphill battle if they were to face Geelong in September.

2. Nick Riewoldt’s career will end without another finals appearance

It’s going to be a disappointing finish to the season for St Kilda, as they now look destined to miss the top eight. Perhaps what is even more saddening is that Nick Riewoldt’s career will end without a bang.

It has been a stellar 17 years in the league for the Saint, and he deserves to have one more crack at the finals. However, after their loss on the weekend that now looks out of the question.

There is little doubt that the club will look back at 2017 and say what could have been, as it appears in the end it’s a season that has gotten away from them.

3. Matt Crouch may be one of the most underrated players in the competition

Matt Crouch ranks third in the competition for disposals per game, and inside the top 10 for average contested possessions. He is one of the best two midfielders in the top team in the league, however rarely gets the recognition he deserves.

The lack of praise for Crouch most likely comes from the Victoria-centric media focus, however he deserves to be mentioned amongst the league’s elite.

4. Carlton will win the wooden spoon

Despite taking it up to the Eagles, the Blues suffered a tough loss on the weekend. They now sit on equal points with Brisbane and North Melbourne at the bottom of the ladder.

Looking to each side’s run home, it would appear Carlton have the toughest teams, having to play Hawthorn and Sydney. The Lions and Kangaroos play each other in round 23, meaning either one of them will definitely take home more points before season’s end.

They don’t deserve to, as they have played some great football, however Carlton look to be destined for yet another wooden spoon.

5. We need to keep an eye on Cameron Zurhaar

The numbers weren’t necessarily stunning for Zurhaar, who kicked two goals and had 13 touches against the Hawks. However, if you watched the game you would understand why North Melbourne is so excited about him.

His first goal was stunning, grabbing the loose ball in a pack, bursting out, brushing a tackle and slotting it from 40 metres out.

His second goal was also impressive, a snap late in the game. These glimpses of class and skill are exciting and he is no doubt a player who could turn into something special. Don’t sleep on Cameron Zurhaar!

The player from EVERY club facing a make or break 2021...