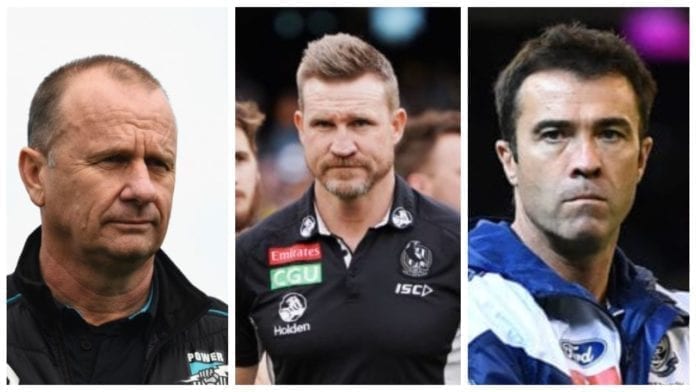 You can smell it, can't you?

The days have grown longer and the flowers may be blooming, but these signifiers of Spring are all inconsequential to the footballing fanatic.

With the temperature rising, realistically and metaphorically, and the pretenders now separated from the contenders, it can only mean one thing - finals football.

Sure, in a standard season we would only be days away from a do or die clash in front of a packed house at the MCG, but 2020 has proven that tried and true recipes are not to be regarded.

Even though the frenetic home and away season has rounded the bend and passed the post, the job is still ahead of eight clubs in their hunt for the 'Covid Cup'.

With a week off before the season's after party begins, each of the octet of coaches who have received invitations still have chores to perform before the champagne corks can be cracked

From the eighth seed to there first, here are the 2020 premiership contender’s ‘to do lists’.

Games of football are won on the scoreboard and if Collingwood are to salute for the first time since 2010, they will need to rectify their scoring woes.

The re-injection of Jordan De Goey should go a long way to helping the misfiring Magpies.

In the first seven rounds of this season, the Magpies averaged 61.5 points for and a miserly 42.5 points against. Sure, the scores they put on the board weren’t anything to write home about, but with the stingiest defense in the league, the Pies held a 4-1-2 record entering their round eight fixture. In the period that De Goey was sidelined, they averaged a measly 52.6 for whilst conceding a mean of 59.5.

With a makeshift forward line, this statistic is hardly surprising. The three tall targets Collingwood have used in this season include a wildly inconsistent newcomer to the game (Mason Cox), a man better known as a ruckman (Darcy Cameron) and a player who was originally drafted as an intercept defender (Brody Mihocek).

In previous years, they have been able to disguise their lack of a tall target by harvesting goals from their fleet of small forwards. However, with Stephenson, Elliott, Thomas and Hoskin-Elliot combining for just 2.2 goals a game, there aren’t enough reams in the western hemisphere to paper over the cracks.

It wouldn't surprise anyone to suggest that Buckley and the black and white brass will be keen to see a higher return from their investment in Brodie Grundy. The big man has failed to reach the heights of his previous pair of seasons, but remains a crucial cog in the Collingwood machine.

Despite De Goey's goal laden return, there have been no willing participants to ride tandem with him for any prolonged portion of time. If the former Oakleigh Charger is forced to continue pedaling unaccompanied, then it will likely be curtains for Collingwood's season.