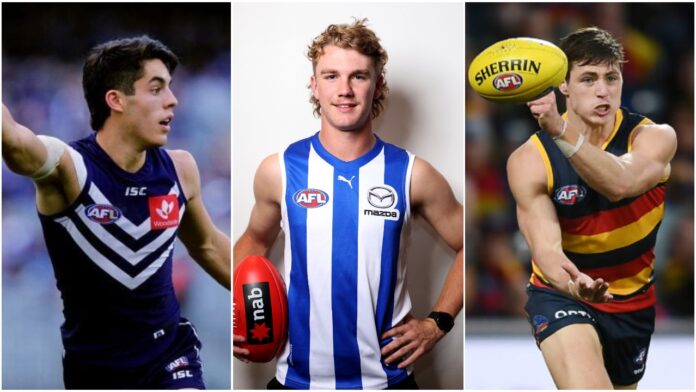 AFL clubs have finalised their lists ahead of pre-season, with only the Supplemental Selection Period the remaining avenue for sides to further add to their squads.

Whether it was via the trade window, free agency or through the draft,  each club has been able to bolster their squads with ready-made or youthful talent.

Some clubs have looked to inject further youth into their list demographic amid rebuilds, while those hoping to contend for the premiership have looked to strengthen their bid.

Here is every new face for each club ahead of 2022.

The Crows have continued their rebuilding phase under Matthew Nicks, adding in another top 10 pick in Josh Rachele among their trio of draft selections. Their biggest coup was the recruitment of South Australian and Swans midfielder Jordan Dawson, who is set to add plenty of versatility at West Lakes.

The Lions were among the quieter clubs this off-season, acquiring Darcy Fort from Geelong as their only inclusion via the trade window. Holding two first-round picks had Brisbane in good stead, with Darcy Wilmot and Kai Lohmann making moves to Queensland.

The Blues held a prominent position throughout the course of the off-season, with their biggest change coming in the coaches box as Michael Voss replaces David Teague as senior coach. Voss' aspirations for next season have been buoyed by the recruitment of Adam Cerra from Fremantle, while George Hewett and Lewis Young are set to play key roles at Ikon Park next year.

The Magpies identified youth as a focal point of their recruitment drive, with Nathan Kreuger and Patrick Lipinski joining via the exchange period. Their headlining fresh face comes in the form of father-son selection Nick Daicos, who landed at fourth overall in the National Draft.

The Bombers were inactive during the trade window, which followed their acquisition of free agent Jake Kelly from Adelaide. The Bombers also walked away from the draft satisfied, with Ben Hobbs a highlight of their youthful recruitment.

The Dockers had arguably the best draft haul this year, adding a trio of promising local names touted as top 20 prospects in this year's class in Jye Amiss, Neil Erasmus and Matthew Johnson. The Dockers were also able to add Will Brodie to their midfield, while Jordan Clark is set to add flare to their squad.

The Cats were one of several sides to add to their list through all three avenues, adding Jonathon Ceglar through the trade period, Tyson Stengle via delisted free agency and six further players through the National and Rookie Drafts.

The Suns were able to add to key-positon areas this off-season, with Mabior Chol joining from Richmond, Mac Andrew falling at Pick 5 in the National Draft and Levi Casboult joining Gold Coast via the Rookie Draft.

The Giants were quiet figures throughout the exchange window, with delisted free agent Jarrod Brander their only acquisition prior to the draft. The Giants were able to add strong youthful stocks through Finn Callaghan at Pick 3 along with fellow first-round selection Leek Aleer and Academy product Josh Fahey.

The Hawks were able to add to their rucks stocks with Magpies tall Max Lynch ahead of the National Draft, while Josh Ward frames as a future star midfielder under Sam Mitchell's reign.

The premiers were able to bolster several areas of their already star-studded list, with Luke Dunstan joining the Demons through free agency. Draftee Jacob van Rooyen will offer as a flexible option if needed, while Blake Howes is an exciting athletic prospect.

The Kangaroos were a vocal club this off-season, adding No.1 Pick Jason Horne-Francis through the draft and stunningly swooping on now-former Sun Hugh Greenwood in what was a memorable heist for North Melbourne.

The Power have been able to add to their defensive depths with the acquisitions of Josh Sinn through the National Draft and former Lion Sam Skinner via delisted free agency. Jeremy Finlayson also adds to Port Adelaide's attack after joining from the Giants in the trade window.

The Tigers were able to fill defensive voids this off-season, with veteran Roo Robbie Tarrant joining through the trade period, while Josh Gibcus, Tom Brown and Sam Banks will also lengthen their pecking order.

The Saints were one of the quieter clubs this off-season as far as recruitment, with Nasiah Wanganeen-Milera headlining their draft haul. NGA prospects Mitchito Owens and Marcus Windhager also make the move to Moorabbin, while ruckman Tom Campbell gained a lifeline to join his third club.

The Swans were able to add height with the acquisition of ruck/forward Peter Ladhams via the trade window, while a quartet of promising young faces will make the venture to the Harbour City after gaining spots through the National Draft.

The Eagles were able to swoop on wantaway Blue Sam Petrevski-Seton in the trade window, while their first-round selection in Campbell Chesser is also set to add to their defensive midfield stocks.

The Bulldogs' recruitment planning was highlighted by father-son prospect Sam Darcy officially heading to the Kennel. The Dogs were also able to acquire Tim O'Brien through free agency, with the former Hawk bolstering Luke Beveridge's backline.