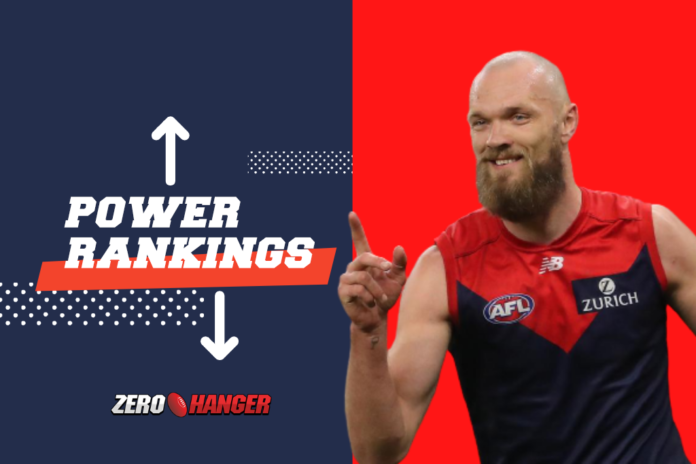 A mind-blowing weekend of footy has produced our Grand Finalists for season 2021 after a long, winding season of many ups-and-downs.

Melbourne have their best chance in over 50 years to win the flag after a 'Dee-molition' job of Chris Scott's Geelong on Friday night and will go into the match as clear favourites.

The Doggies flipped the script in their preliminary final, absolutely destroying Port Adelaide at Adelaide Oval to the tune of 71 points and setting up one of the most tantalising deciders in recent memory.

With this, let's see where each side sits in the power rankings chart.

The Dees were absolutely electric in their 83-point shellacking of Geelong, playing their best match of the season to book their first Grand Final berth in 21 years.

It was all about Max Gawn as the loveable big man delivered arguably the greatest prelim' final performance of all time, booting five goals including four in the third quarter.

RELATED: Dees to be firing on all cylinders for Grand Final

It was a culmination of everything Simon Goodwin's side had been working towards in 2021 - hard, fast and fun football which even neutrals can't help but smile at.

Now all heads turn to their Grand Final showdown against the Doggies next weekend, with the side determined to end the long-time suffering of fans with premiership number 13 - 57 years after number 12.

Luke Beveridge's side were scarily effective against the Power, leaping out the blocks with a seven goal first quarter to embarrass Ken Hinkley's side by 71 points.

Once again Bailey Smith was electric for the second week in a row, booting four goals and racking up 23 disposals as his side cruised to a second grand final appearance in five years.

"It's almost cheat code stuff with him at the moment."

Despite the questions asked of the Dogs following their horror end to the home-and-away season, Luke Beveridge's men seem to have answered them all with three super-strong finals displays to silence the doubters.

The parallels between 2016 and this year have been obvious but this time the Dogs don't possess the element of being genuine underdogs, with the side containing many more elite players now than last time out.

They will go in as outsiders to this one but anything could happen if they replicate their preliminary final form on September 25.

The Cats were annihilated by the Demons on Friday night, exposing the cracks that are starting to appear down at Kardinia Park.

It seemed like men against boys for most of the match, a particularly ironic statement considering the experience that Geelong has within it's ranks.

RELATED: Questions raised over Selwood's ability to go with the best

There is a sinking feeling that goes with a loss like that and it seems like time has finally caught up with Chris Scott's side after so many years at the top.

Now it is time for Scott and his backroom staff to make big calls over who stays and who goes this off-season with his side in clear need of a revamp.

The Power were shocked on Saturday night when they found themselves 37 points down at quarter time, with Ken Hinkley's side coming up well short in a preliminary final in a match that had so much promise for his men.

Port were outclassed and outworked all night in a match that will haunt many of these players for the rest of their careers.

It begs the question over whether the Power truly had the ability to go the distance, with the result only fuelling the sentiment that they were 'pretenders' all along.

Nevertheless the side have another off-season to mull over a heartbreaking preliminary final loss and will have to come back next year for another shot.