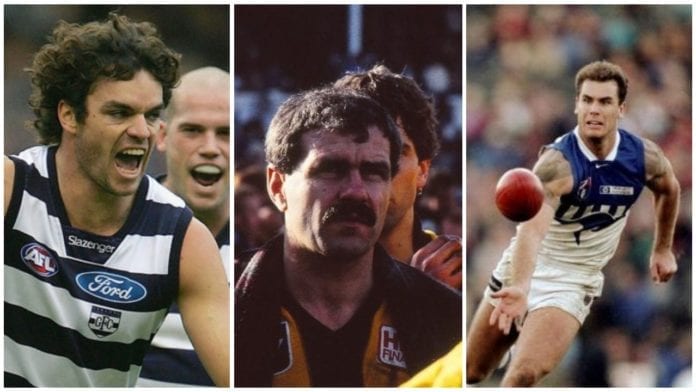 Former AFL stars Brad Johnson and Nick Dal Santo have selected their best 22-man squad from the past 50 years on Fox Sports.

The pair came together to select their own sides full of the game’s best since 1970, with the ordeal causing a number of interesting arguments.

While both sides managed to share the same 14 players between their squads, Dal Santo and Johnson found certain selections of their counterpart to raise an eyebrow.

“Hodgey’s leadership is what stood him apart,” Johnson said, when asked to explain his reasoning.

“But when I look at pure skill and ability, for me Burgoyne has been a better player skill-wise than what Luke Hodge was.”

Dal Santo responded: “That surprises me a bit… I would still question whether Burgoyne is a better distributor of the football on the back flank.”

The former St Kilda and North Melbourne onballer revealed he would select Hodge to perhaps play a role on a key forward such as Lance Franklin.

“If I said to Luke Hodge, who I have on the halfback flank, I want you to play on Franklin this week, you know what he’d say? Yes please!” Dal Santo said.

“He’d be licking his lips, the two-time Norm Smith Medallist. I’d back Hodgey in.”

Johnson shot back: “Hodge would have 10 kicked on him! Anthony Hudson would be calling THIRTEEN.

“I actually think my back half matches up a lot better than what yours does. Burgoyne would play on Franklin. He’s a better match-up than Hodge because… Just because!”

The pair also discussed a number of snubs to fellow Fox Footy colleagues, with the likes of Jason Dunstall and Jonathan Brown not making either list.

“I am not sure Dunstall would enjoy being my emergency,” Dal Santo said.

Brown reveals why he turned down monster offer from Collingwood