30 players have called time on their AFL careers in 2022, while more retirements could be on the way as clubs continue to shape their lists for next season.

Multiple players are also reportedly considering changing clubs despite deciding to announce the end of their careers in recent months.

Compiled of living legends of the game, here's a full list of every AFL player that has hung up the boots this year.

Luke Brown: Leaves the Crows after 189 games. Made his debut at West Lakes in 2012 and featured in their grand final defeat five years later.

Mitch Robinson: A somewhat messy departure from the Lions, however Robinson was noted to be hanging up the boots. The former Blues and Brisbane hard-nut has revealed he remains in conversations with club to potentially continue his career. Played 247 games, 100 with Carlton and 147 with the Lions.

Jordan Roughead: Departed Collingwood mid-season to help their list planning for the Mid-Season Draft after an ongoing battle with injuries. The former Bulldog has remained at Olympic Park in an off-field role with both their men's and women's sides. Played a total of 201 matches across his time with the Bulldogs and Magpies over 13 seasons.

Michael Hurley: Was given a heartwarming farewell in Essendon's Round 23 loss to Richmond, where Hurley booted a goal from six touches. Leaves the Bombers after 194 games in what was a rollercoaster tenure at Tullamarine.

Devon Smith: Called time on his career following an ongoing battle with injury, leaving the AFL after 182 games and as a member of GWS' inaugural side. Leaves as a Crichton Medal winner.

Anthony McDonald-Tipungwuti: Decided to leave the Bombers early into the season after a battle with injury and for personal reasons. In an off-season twist, the former Essendon livewire is considering a return to the AFL, whether that be with the Bombers or Fremantle.

David Mundy: A true champion of the game. Departs the Dockers as their all-time games record holder with 376 appearances to his name. Hangs up the boots as an All-Australian and Dog Medal winner. Could have gone on another year or two.

Joel Selwood: Geelong's greatest clubman ever. Departs on the highest note after winning his fourth premiership and first as captain of his beloved club. Add in a Rising Star Award, six All-Australian selections and three Carji Greeves Medals as Geelong's games record holder, along with most games in the AFL as captain and most finals games in V/AFL history.

Shaun Higgins: Retires as a three-club player after 260 games across his time with the Bulldogs, Roos and Cats. Won two best and fairest awards with North Melbourne, as well as an All-Australian selection in 2018.

Luke Dahlhaus: Hangs up the boots as a premiership player as a member of the Western Bulldogs' drought-breaking 2016 side. Could add to his tally with the Cats but leaves as 225-gamer after 71 matches at Kardinia Park.

Matt de Boer: Will be remembered as one of this century's best lockdown midfielders after the number of star scalps he has to his record. Split his career across Fremantle and GWS, playing 223 games.

Liam Shiels: Hangs up the boots as one of the underrated players of the 21st century with three premierships and 255 games to his name. Is said to be open to returning to the AFL for 2023.

Ben McEvoy: The Hawks skipper leaves the AFL as a dual premiership player and champion of two clubs. Played 252 games after making his debut with St Kilda in 2008.

Mitch Brown: Another three-club journeyman, Brown joined the league as a first-round pick with Geelong before finding a lifeline through Essendon during some of their tougher years. Called time at the Demons after 79 games in 11 seasons.

Majak Daw: A stunning story, with Daw returning to the AFL through Melbourne after breaking his hips and pelvis during his time between clubs. Played all of his 54 games with North Melbourne.

Tom Lynch: Joined North Melbourne in the pre-season of this year as a development mentor and on-field asset for the young Roos before ending the year as the club's VFL coach. hangs up the boots after 158 games, 152 of which came with Adelaide. Is also a member of the 10 goals in a game club.

Robbie Gray: Retires as arguably Port Adelaide's greatest ever, and certainly in contention during the club's time in the AFL. A Showdown specialist, triple best and fairest winner, four-time All-Australian and AFLCA Champion Player of the Year from 271 games for the Power. 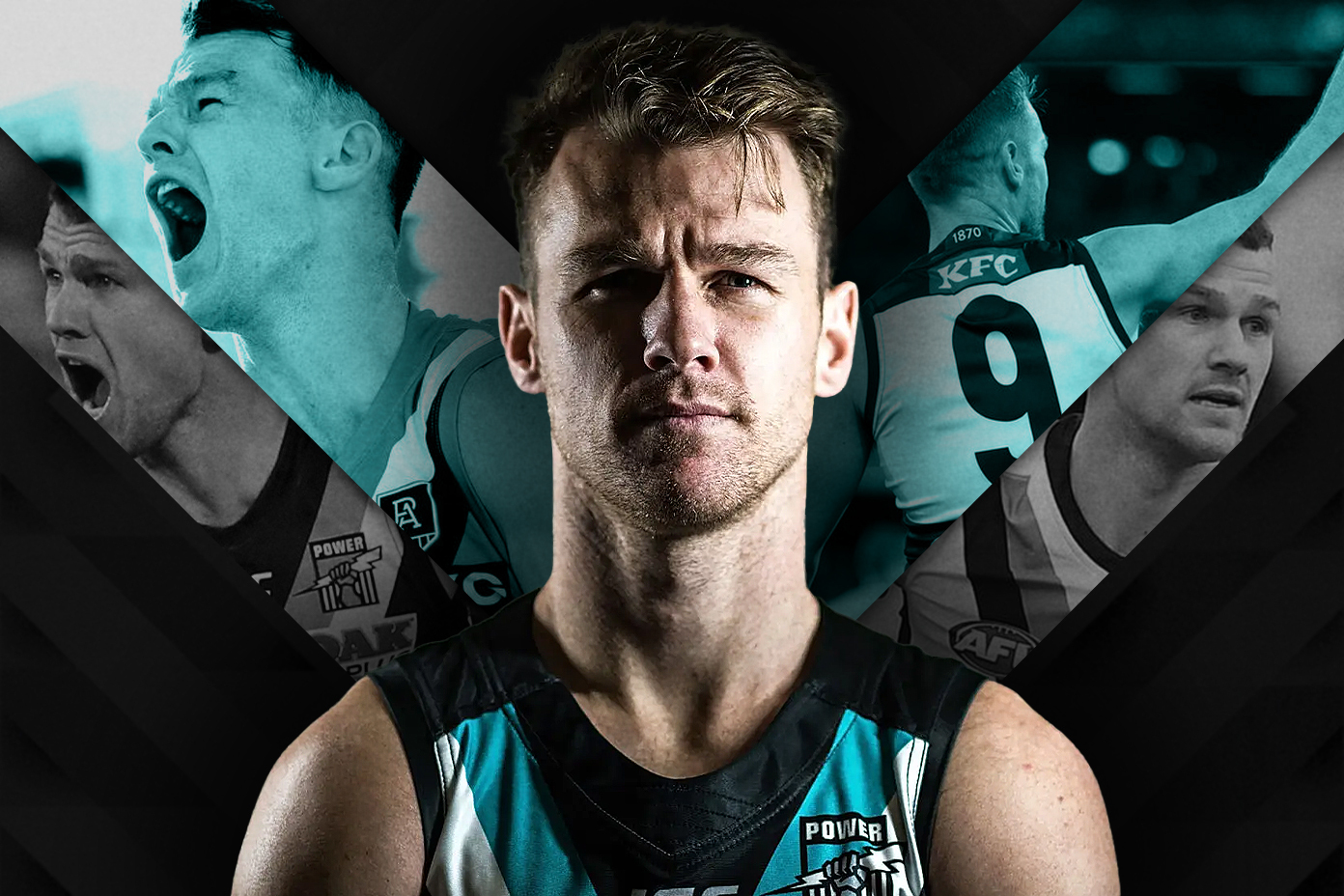 Steven Motlop: Played 217 games for the Cats and Power, 135 of which came with the former. Will always be loved by Port Adelaide fans for THAT Showdown-winning goal in 2018.

Kane Lambert: A stellar story of success after Lambert join the Tigers after being plucked out of the VFL. Was a key piece in Richmond's three premierships and also managed two podium finishes in the club's best and fairests counts in 2017 and 2018.

Shane Edwards: A club great and fan favourite. Another member of the Tigers' three premierships, Edwards hangs up the boots as one of only six players in Richmond's history to reach 300 games.

Josh Caddy: Another member of the three-club club, Caddy's most successful stint came with Richmond, where he won two flags. Amassed a great year in 2018 before facing ongoing issues with injury that ended his career.

Dan Hannebery: A sour note to end his career after an injury-riddled tenure with St Kilda, but Hannebery leaves the league as a premiership player, AFLCA Champion Player of the Year winner and three-time All-Australian for his dominant run with the Swans.

Jarryn Geary: Injuries halted Geary's career toward the end, with the former Saints skipper managing just three games in the last two years. Played 207 games for the Saints across 15 years at Linton Street.

Paddy Ryder: A great of the game who hangs up the boots after 281 games. A memorable ANZAC Day performance in 2009 saw Ryder burst onto the big stage before enjoying his best years at Port Adelaide, where he won an All-Australians selection and John Cahill Medal.

Dean Kent: Snuck in his 100th AFL game in a farewell match against Sydney in Round 23. Played 63 games for Melbourne, making his debut as a Demon in 2013.

Josh P. Kennedy: The numbers don't only tell the story of Kennedy's career, but they certainly show enough. A contested ball-winning beast and a consistent performer for the Bloods. Played his first 13 games with Hawthorn before adding another 277 games in the red and white, where he won three best-and-fairest awards, three All-Australian selections and a premiership.

Colin O'Riordan: The Irishman leaves the Swans after 34 games in five seasons and will return home in the peak years of his career.

Callum Sinclair: Played 118 games split across his time with West Coast and Sydney. Sinclair took on a mentoring role with the Swans' VFL outfit after calling time on his career in August.

Josh J. Kennedy: Arguably the Eagles' greatest ever. Kennedy retires as one of the AFL's best-ever forwards with club-high 723 goals to his name. A premiership player, two-time Coleman Medal winner, three-time All-Australian player and eight-time Eagles leading goalkicker. West Coast will be rapt with Kennedy's career after acquiring him in a trade with Carlton for Chris Judd.

Jack Redden: A surprising retirement, with Redden catching some off-guard with his decision to hang up the boots. Played the most games for West Coast in 2022 to end his career as a Lion and Eagle with 263 matches to his name.

Stefan Martin: The Bulldogs ruckman hung up the boots after 203 games, ending his three-club career following stints with Melbourne, Brisbane and the Western Bulldogs. Claimed a Lions best and fairest in 2015.