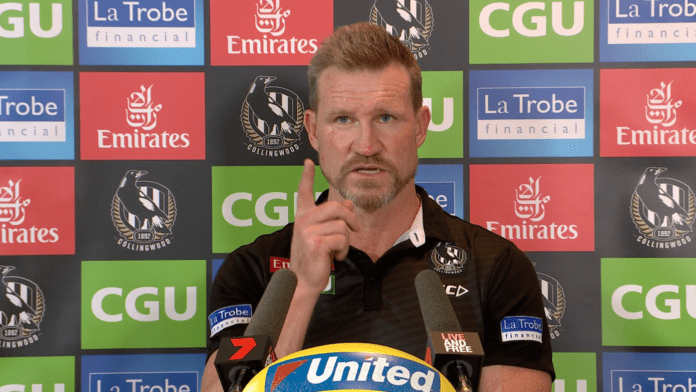 Collingwood coach Nathan Buckley’s press conference had ended after coaching his 200th game in a 24-point win over the Blues on Sunday.

That’s when he made the rare decision to raise his hand and speak out on an article written about him during the week.

The Herald Sun’s Mark Robinson published a piece about how Buckley’s football resume was unfulfilled without that elusive flag.

Buckley has played and coached in the most AFL games without winning a premiership and is currently in his ninth season in the Pies’ top job.

And despite comments from Buckley early in his coaching career that he had a void without the silverware, he hit out at suggestions that his life was ’empty’.

“Can I just say something – I know there was an article in the paper the other day, I don’t want to make it all about me, it was about emptiness,” Buckley said.

“I just want to put on record my life is very far from empty.

“I don’t have a flag, I’ll be working towards it, but it’s not going to define me whether I get it or not.

“My life is very full. I’m very fortunate I’ve got a lot of love, a great club, a great group of boys and I’m looking forward to whatever the next couple of months brings.”

Nathan Buckley’s response to those who say his life is empty without a flag. 💯

“It puts perspective back into the conversation. When I read the article, I thought ‘that’s not going to define Nathan Buckley’,” Lyon said.

“He’s not going to go through life empty because he hasn’t won a premiership.

“From a footballing point of view maybe, but there’s more important things in life than footy.

“I’m a little bit surprised, but I’m glad he did it. The other thing is it sends a message to his playing group as well that there’s always got to be some balance in all of this.

“There are some that would be stressing about opportunity and whether this is going to pass them by.

“I like the message he sent in there, I really did.”

Buckley’s Magpies came closest to the top prize in the 2018 Grand Final when they went down to the West Coast Eagles by five points.

Last year Collingwood lost to GWS in the preliminary final by two points.

They currently sit sixth on the ladder ahead of Friday night’s clash against Brisbane at the Gabba at 7.50pm AEST.