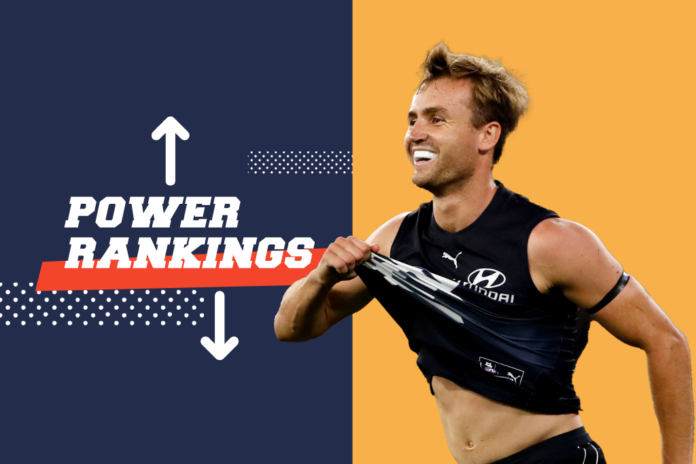 Normally by this time of year, the AFL ladder starts to take shape and we begin to have a clear idea of who will be the likely contenders. After 10 rounds of the 2022 season, we still don't know who will be the most likely to challenge the Demons and Lions at the top.

At the foot of the standings, there are some teams who are finding it difficult to stop their slide down the rankings as the season goes on.

After a 9-1 start to the 2021 season, the Demons have only gone and bettered their record this time around, winning their opening 10 games of the year. While they didn't blow North Melbourne away as many had expected, they were never seriously challenged and did what they needed to. There's still daylight between them and the rest of the competition.

The Lions seemingly had things under some sort of control against Hawthorn in Tasmania but were promptly overrun by the youthful Hawks. They are clearly missing Joe Daniher and Daniel McStay at the moment but this is still a game they would have expected to win. A possible hamstring injury to star Hugh McCluggage was salt in the wounds for Brisbane on a disappointing day.

If you could bottle what Carlton did in the second quarter, you'd want nothing more. The Blues were in blistering form, kicking nine goals and setting up an impressive win over the Swans. From Charlie Curnow's dominance to Jacob Weitering's resistance at the other end, the Blues proved they are a top-four contender. With a number of their best team still to come back, things are looking bright at Ikon Park.

Has Fremantle's kryptonite been found? Two weeks in a row the Dockers have been comprehensively beaten in wet weather and have seen their scoring grind to a halt. They were second-best from siren-to-siren on Sunday night and rarely threatened to steal the game away from the Pies. Coach Justin Longmuir went as far as to infer that his team may have gotten ahead of themselves.

Saints fans would have been well within their rights to have feared the worst at the three-quarter time of their clash with Adelaide. St Kilda teams in times gone by would have fallen away and let the four points slip. But the current incarnation of the red, white and black showed tremendous character and star power to secure a big win on the road. Any wins while Jack Steele is out are worth their weight in gold too.

The Swans went into the season looking the most likely side to jump into the top four and seemed a likely challenger to Melbourne's back-to-back hopes. They were blasted away by Carlton, with the second term seeing the most goals they've conceded in a quarter in 18 years. It's not panic stations but they'd be slightly concerned that the chasing pack has caught up and maybe some have gone past them.

The Cats did what was widely expected of them as they comfortably defeated Port Adelaide at home. Geelong is proving hard to get a clear read on in 2022 but if they can keep beating the teams around them, they will be a September player for sure. A tight Patrick Dangerfield calf is a slight concern but his form hasn't been outstanding this year as it stands.

The Tigers have found some form in recent weeks having won four in a row. And whenever Richmond gets a run on, the rest of the competition sits a little bit less comfortably. However, who have they beaten? Wins over West Coast, Collingwood, Hawthorn and Essendon have been good for the win-loss record but haven't proved much. But you can only beat what's in front of you.

The Bulldogs were less than convincing in their win over Gold Coast. There just seems to be something not working at the Whitten Oval despite the Dogs keeping their season alive. Some winnable games on either side of the bye could help them get the ball rolling but they can't afford too many mare slip-ups.

Perhaps a minor reality check for the Power who have got their season back on track after it was seemingly destined for disaster after Round 5. They would be disappointed with their second half in Geelong where they only managed two goals as opposed to the Cats' seven. Finals are a chance but they can't afford to drop too many more games in the second half of the year.

What Collingwood did to Fremantle in Perth was nothing short of incredible. They were terrific and genuinely looked a class above at times with their cleanliness. Mason Cox going out of the game for Ollie Henry early paid dividends as the 19-year-old booted four goals to set up the victory. A huge game with Carlton awaits, arguably the biggest game between the two teams since early 2012.

The Suns were okay against the Bulldogs but in their clearly improved state, it's probably a game they would've expected to win. They have proven to be a very hard team to beat at home but their struggles on the road and inconsistency of their performances would be giving Stuart Dew some concerns.

Just when it seemed the Hawks had been dealt a dose of reality and that all wasn't going as well at Hawthorn as it appeared. But their win over Brisbane was the tonic the Hawks needed. Their performance will help arrest fears that they were set for a slide down the ladder. While finals are maybe a bridge too far, they may not be too far away.

The new coach enthusiasm was there in full flight for the Giants. While a new coach doesn't always equal wins, the Giants had an immediate response when they pumped West Coast to the tune of 52 points. Some notable positional changes from Mark McVeigh will be judged further when the Giants take on better opposition, but it's so far, so good.

The Crows were good on Saturday night and as the season goes on there is less and less shame in losing to St Kilda. But at three-quarter-time Adelaide would have fancied themselves as a red-hot chance to secure the four points. They were no match for the fast-finishing Saints in the last quarter and they conceded eight goals to three to fall well short in the end.

It feels like the final two teams in these Power Rankings are living a horrible version of groundhog day. West Coast were yet again absolutely obliterated and showed just how long a rebuild they may be in for.

North were good against Melbourne for as long as could be expected. When the Demons put their foot down there was simply no stopping them, but that's not a sign of North Melbourne's plight. It's hard to see where their second win may come from as they continue to struggle through 2022.