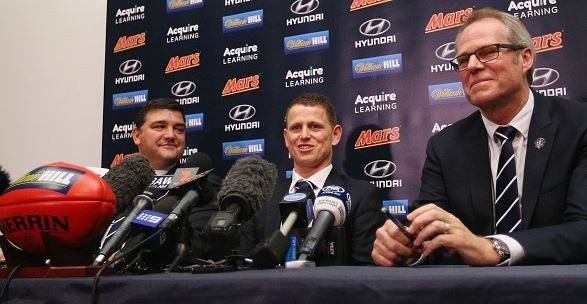 “That list in profile, in my humble opinion is the worst in the competition now and probably one of the worst I’ve ever seen in my entire association with the game,” Parkin told Crocmedia.

“He (Bolton) would understand that, and I’m not pointing the finger at anyone but it is a list that has 7-8 players at the top end who are wonderful contributors and have been A-grade players for that club.

“They’ll all be gone before this club gets back to a point where it’s competitive, playing finals and winning.

“They’ve had 3-4 in the engine room between 24-28 (years old), one of whom has already put up his hand and gone [Lachie Henderson].

“I think there is every likelihood that Yarran might be on the way too because he’s probably one of the guys who puts the cream on the cake but doesn’t help build the cake.

“Matthew Kreuzer is another who has had a long run of injuries and will struggle to play at the level they require. Then at the bottom end from what I saw at the weekend, and I know some are missing, but they’ve probably got only four or five with genuine talent.”

Parkin also said that he believes that Bolton is a great choice as Carlton coach for next year and beyond.

“He’s got this enormous energy and enthusiasm for the game and he’ll need that because this is no short-term fix,” he said.

“This is a club that needs rebuilding from top to bottom and I don’t think they could have chosen better.””