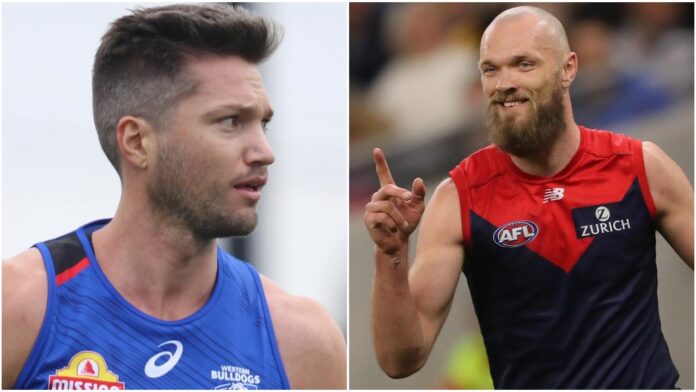 It's no secret a large degree of attention will be placed on Melbourne skipper Max Gawn in the days leading into next Saturday's Grand Final.

The All-Australian ruckman will be coming off a best-on-ground performance over Geelong in the Demons' 83-point victory in Perth last Friday night, an outing that saw Gawn boot a career-high five goals to lead his club to their first Grand Final in 21 years.

The 29-year-old added 19 disposals, five clearances, six tackles and 33 hit-outs to his stat sheet in the victory, culminating one of the greater finals performances this era has seen.

While the Demons will be hoping for more of the same to ensue next weekend, the Bulldogs will be looking to negate Gawn's game style with their new-look ruck combination.

Seen as a weakness in the build-up to their finals series, the Dogs' ruck tandem has been lifted with the return of veteran tall Stefan Martin, who was a valuable inclusion for the club's win over Port Adelaide on Saturday.

The preliminary final was Martin's first appearance since Round 12, having suffered hip and groin issues in the latter half of the season.

Now, preparing for a season-decider against the Demons - and more specifically Gawn - Martin will be hoping to have his own career-best performance in his 199th AFL match next Saturday.

The 34-year-old was limited to capped minutes in the win at Adelaide Oval last weekend as he looks to prime himself for the Grand Final.

Bulldogs coach Luke Beveridge admitted he had doubts Martin would play again this season, crediting his proficiency and attitude to overcome injury.

"[Martin] came through better than what I anticipated," Beveridge said on Thursday. "I had my doubts he'd be able to get to the line to be able to play again this year.

"It's just a credit to his professionalism, the way he has approached his rehabilitation, his strength work and getting through the handful of injuries he had.

"We're really fortunate that he is ready to put his hand up."

Having managed the framework in place by the Bulldogs on the weekend, Martin is set for a larger role in the Grand Final after pulling up from the Port win with more to offer.

"He felt good, he felt like he had a little bit of gas left in the tank," Beveridge said "We planned about 80 odd minutes and that's exactly what we got

"He can probably play some more minutes in this next one if we need him to."

Beveridge backed in the Dogs recruit to utilise his own strengths to sway the ruck battle in his favour.

"'Stef' has played against Max over the journey, he's been a teammate of his historically," the Bulldogs coach said.

"There's a strength in Stefan's game that we'll call on that will be important in that battle and then what happens around their feet will be absolutely critical in the outcome."

Reflecting on Gawn's stellar preliminary final performance, Beveridge could do little to sway away from lauding the Demons skipper's leadership and prowess.

"A great leader of the Melbourne Football Club. We really respect him and what he does."

The Dogs were victorious over the Demons to the tune of 20 points in their last clash, despite Gawn managing 56 hit-outs in the Round 19 match.

With Martin sidelined at the time and defender Alex Keath subbed out of the match in the opening quarter, the Bulldogs were able to rely on reinforcements to negate Melbourne's midfield ensemble.

Beveridge said the team's ability to adapt to the situation was a key pillar in the win.

"Last time we lost Alex Keath in the first 10 minutes of that game against Melbourne so being a tall down meant that we had to change our original game plan, and the boys did tremendously well to make some adjustments," he said.

Keath is "on track" to overcome a hamstring injury that kept him sidelined against Port Adelaide, with Beveridge stating the defender still "needs to tick off a few parameters".

Forward Laitham Vandermeer is also showing positive progress as he too looks to overcome a hamstring/glute complaint.

The duo, along with returning small forward Cody Weightman, are sure to place pressure on Beveridge's selection planning next week, with the Dogs coach already forced to rung several changes throughout this post-season series.