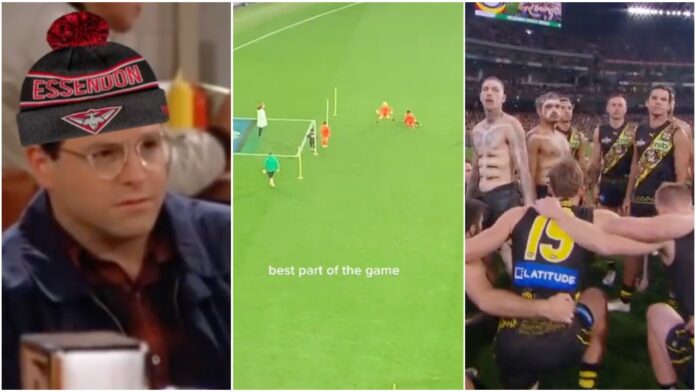 It's always nice to come to the end of the week, and look back on funny, heartwarming and interesting things that have happened in the AFL community that week.

Here are some of the best stories of this week, that we feel will brighten up your day and garner a few laughs.

The promotion of the year

This week TikToker Josh Garlepp posted a snippet of his interview with Broden Kelly, a member of the Australian comedy group, Aunty Donna.

Now, this wasn't just any old interview, in fact, the video provided insight into Kelly's phone call he made to 'Trade Radio', in which he tried to promote his group's Netflix special. It made waves around TikTok for making zero sense and just being hilarious.

Watch the video below👇

In a 2016 game between the Sydney Swans versus the Richmond Tigers, a moment occurred that made history. Just as the siren goes off, the Tigers had a chance to kick a goal and win by one point.

Well, the impossible happened, and with that came the best commentary of all time, with the iconic "THEY'RE BANANAS AT THE 'G" line.

The AFL's TikTok account decided to bring back this iconic moment, alongside Aussie AFL comedians, @ShepMate, who recreated the iconic commentary.

Have a laugh yourself and rewatch an iconic moment in AFL, with a modern twist to it. 👇

Last Saturday, at the MCG, a show went down between the Essendon Bombers and Richmond Tigers. Whilst the game itself was interesting, it ended with the Bombers beaten and looking for answers.

But the highlight of the game wasn't the domination by the Tigers, it was in fact the show put on at halftime by the NAB Auskickers.

A TikTok video captures a young boy, who was obviously born to play AFL, swerving, shoving and ultimately kicking a legendary goal. The crowd went wild for the Auskicker, and TikTok went even wilder for the video, racking up 236k views in a week.

TYPEMedia might've put out our favourite video on their Instagram this week. The video captures what would be Essendon fans right now, as they continue to see a season filled with losses and disappointment.

Although, with a comedic twist to it, TYPEMeida has created the best cross over ever, of Essendon FC and Seinfeld's George Costanza.

The video captures all the ranges of emotions Essendon fans must have felt over the last 10 weeks.

Last Saturday, as a part of the Sir Doug Nicholls Round, Richmond had us all emotional.

Prior to the game, the Richmond Tigers and the Essendon Bombers showed their respects to their Indigenous heritage, with both teams having a First Nations ceremony.

The Richmond Tigers though surprised everyone by integrating the players into the dance, something that usually doesn't happen.

The crowd picked up quickly on what the players were doing and cheered them on as they did so. The Indigenous Richmond players were circled by their teammates and provided a clear example of equality, respect and friendship.