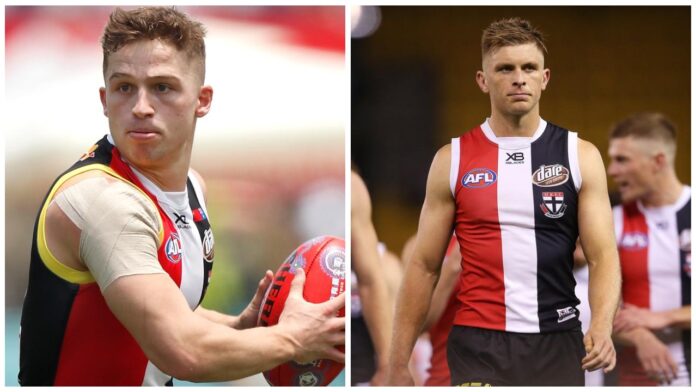 Out of contract Saints pair Jack Billings and Seb Ross could potentially be at new clubs in 2022 should the Saints look to head back to the draft following a poor season so far.

The Saints, who made their first finals series last year since 2011, have won just five games so far this season and currently have the second worst percentage in the league, thanks to four 50+ point losses in the opening ten rounds of 2021.

The club favoured the inclusion of big name, experienced recruits such as Brad Hill (traded from Fremantle) and Brad Crouch (free agent) at the expense of draft picks and youth and could now potentially look at moving on Ross and Billings to secure some young talent.

Billings, who was drafted with pick three in 2013 national draft, has played 139 games for the Saints but has been plagued by inconsistent form. The 25-year-old, who signed a contract extension in 2019 reportedly worth in excess of $700,000 a season, is a restricted free agent at the end of 2021.

Speaking on SEN, North Melbourne great David King believes the Saints should look to cash in on Billings as a potential high draft pick could land in their lap as compensation.

“Now he’s inconsistent, he’s all of those things that you want to throw up, but I’m a believer that he will pull the amount of money and the tenure at the next contract at the trade period that would draw a first-round selection.

Ahead of his 100th game, enjoy some of the best from Jack Billings 🌟 pic.twitter.com/b3md7zc5sO

“A club like the Kangaroos … even a Carlton. Teams that are looking for a spike.

“I would do it. If I were the Kangaroos and had some salary cap opportunity there, I would do that. That would satisfy St Kilda, they’d end up with pick 5, 6 or 7 at the end of the season given their ladder position at the moment.

“That would be a win for both parties.”

Speaking on Ross, King suggested that the two-time best and fairest winner could fill a much needed leadership position at the Suns.

“I’d look at doing something with Seb Ross, maybe to the Gold Coast Suns,” King said.

“The Suns need that sort of player – a standard setter, someone who understands that lifestyle and what’s required to show these young kids how hard this game is and what you’ve got to do to prepare and perform.

“Because Seb’s done that, to his own levels, he has done that. You can dislike what he doesn’t do – another player that sometimes you can start looking at what they can’t do than what they can – it would be good for the Suns.”

Suns president Tony Cochrane stated on Fox Sports this week that the club will be looking to add experience in any way they can at the conclusion of the 2021 season.

“There’s no point loading us up with more young kids. I mean, that is not going to solve this problem guys,” he said.

“We need some senior people.

“I won’t name names, but we were very hopeful at the end of last season that we were going to put pull a couple of very senior people to our club who we had our eye well and truly on. And for reasons best known to them they changed their mind at the last moment and didn’t join the party."

Should the Saints look to move the duo on, it is expected they would receive a first round pick in return for Billings, to add to their current number six selection. Following their first pick, the club currently doesn't have another selection until number 42, followed by 60, 78 and 96.