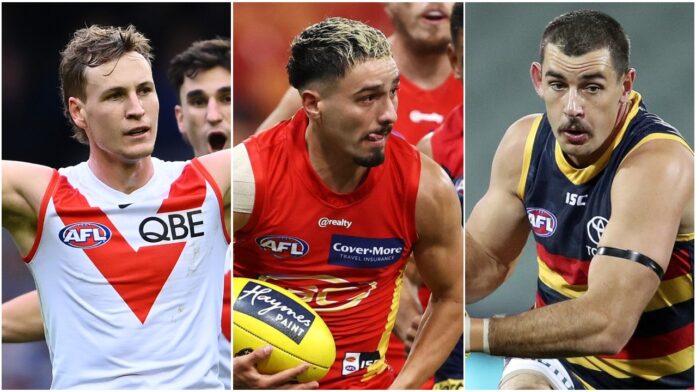 Crows list boss Justin Reid has provided an off-season summary for Adelaide's planning ahead of the upcoming exchange period and draft.

The Crows are facing a busy trade window in the coming weeks, with Swans gun Jordan Dawson requesting a move to West Lakes, while Adelaide free agent Jake Kelly has nominated Essendon as his preferred destination for 2022.

Reid will also be looking to utilise Pick 4 at the National Draft as the Crows look to bolster their youthful stocks amid a promising rebuild.

Dawson is set to arrive back in his home state and land at the Crows once the Swans are able to agree to a deal for the versatile midfielder.

Reid said the club have will hold conversations with Sydney in regards to finding a desirable outcome for both parties.

“We’ll have some chats with Sydney and work through that over the next fortnight,” said Reid.

“We’ll work through what’s fair and reasonable. The trade period doesn’t start until Monday so we’ll start those conversations more next week.

“We’ve certainly had preliminary conversations with Sydney. Kinnear Beatson and myself have had these chats.

“They’re obviously working on certain things themselves as well so we’ll pick up those conversations next week.”

The Crows are unlikely to part ways with their top draft selection for Dawson, however Adelaide have been linked to potentially moving up the draft order, as the Suns' No.3 pick is believed to be on offer.

Reid did concede local prospect and likely No.1 pick Jason Horne-Francis is set to fall to the Kangaroos at the 2021 Draft, with his talents on show in last week's preliminary final defeat for South Adelaide.

"We saw what Jason did last Friday night in that prelim for the Panthers," Reid said.

"He's a quality individual and I wouldn't have thought North Melbourne aren't moving too much on their pick one."

Reid was also able to give some insight into the club's future planning, with Gold Coast young guns and South Australian products Izak Rankine and Jack Lukosius commonly linked to both the Crows and Port Adelaide.

“We always keep an eye on all South Australian talent.

“They’re contracted. They’ll see out those contracts and how things play out over the next 12 to 18 months, time will tell, but we’re certainly having conversations with various managers about players and how we can try and make our list stronger.”

The club have also had to deal with critical calls within their own four walls so far this off-season, with veteran duo Tom Lynch and Daniel Talia not being offered new deals for 2022.

The Crows also decided to retain forward Taylor Walker for the final year of his contract following his racist comments earlier this season.

Reid confirmed Walker is a key part of Adelaide's plans for next season as they look to embark on a potential return to the top-eight.

“He’ll be playing at the Adelaide Football Club next year. He’s determined to get inside the four walls and go about his business.

“He’s about improving and so are we as a football club.”