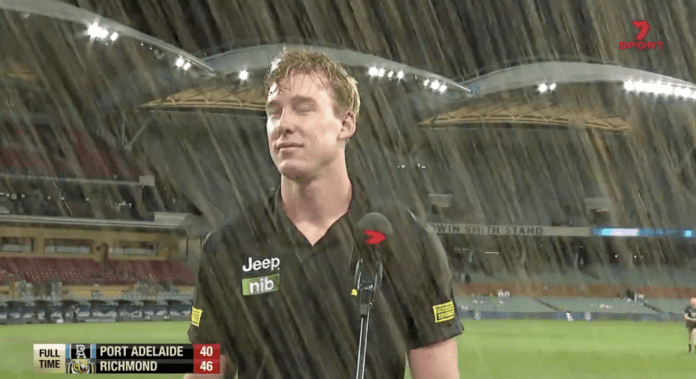 An AFL fan has been removed from Adelaide Oval after allegedly throwing their drink on Richmond star Tom Lynch following the Tigers preliminary final win over Port Adelaide on Friday.

Lynch, who was being interviewed by Channel 7 post-match, was hit with “bourbon and coke” whilst speaking to analyst Daisy Pearce.

“Sorry Daisy, I’m copping it here a little bit. Can you please repeat that? I just had a Bundy and Coke on me, but anyway,” Lynch said.

Reporter Tom Browne confirmed a fan had been ejected from the ground, with police believed to be investigating.

“A bourbon and coke – a plastic glass of it was thrown towards him.

Tom Lynch had a drink thrown at him before his post-game interview pic.twitter.com/B1WGi8U1Yh

“A very, very small amount hit Tom. I think our crew copped most of it.

“The police will look at it, I think they ejected the person involved.”

Lynch booted one goal for the night as Richmond sit one win away from a third premiership in four years.