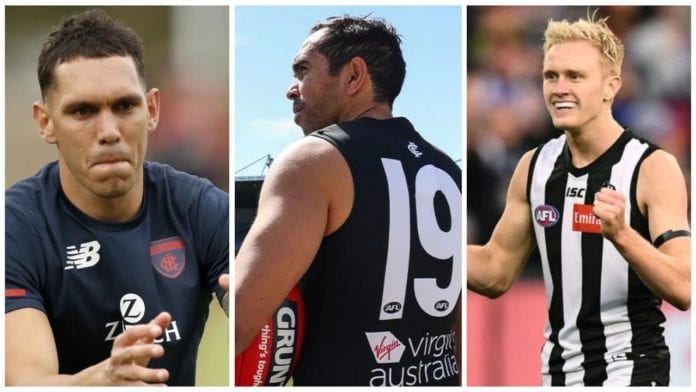 The dates are set and so is the fixture, with the only build up left for Round 2 of the 2020 season being the team selections this time next week.

Clubs and their players have slowly looked to move back into normality following the abnormal and unprecedented circumstances of this season, with the focus now on the coaches’ selections for the season return.

The three-month hiatus means players who were once facing a majority of their 2020 campaign on the sidelines can now look to have a major impact, while a number of hopeful debutants wish to make a name for themselves during these trying times.

Across the nation, footy fans are excited to see what is in stock for us come Round 2, with plenty of faces set to change along with the dynamic that is the season so far.

We have unveiled the biggest names that stand a chance to make their season debuts next week.

The former Gold Coast speedster was thrown a lifeline by the Demons via the supplementary selection period and looks set to be fit for Round 2 thanks to the seasons hiatus.

Simon Goodwin has revealed that Bennell is a strong chance to run out for his side in 2020 but it remains a question as of when.

If both Bennell and Goodwin get their wish, Melbourne fans will be foaming at the mouth for the addition if some much needed outside run.

The mercurial and flashy goal sneak made a fairytale return to the club that he first called home.

Betts failed to reach fitness to make his much-anticipated debut in Round 1 against Richmond but the seasons suspension will perhaps allow him to don the navy blue for Round 2.

The 600-goal superstar will be a breath of fresh air for the struggling Blues, who hope to return to the top-eight for the first time since Betts’ last season with the club.

Steven failed to make the Round 1 lineup for Geelong’s clash against the Giants with soreness and looked to be fit and firing before suffering a stab wound.

The four-time St Kilda Best and Fairest has since returned to the training track and will be hopeful to be back in action for his sides clash against modern day rivals Hawthorn.

The flashy onballer will be a key in for the Cats, with Chris Scott hoping the club can collect their first win of 2020.

The seasons pandemic-enforced suspension has given Ward the chance to catch up to speed with his rehabilitation from his season ending knee injury in April last year.

A shoulder injury to fellow midfield star Tim Taranto will allow Ward to smoothly move back into the heart of the Giants midfield.

The former Giants skipper will be a substantial inclusion for Greater Western Sydney, with the club aiming to go one step further than their Grand Final heartbreak in 2019.

The third overall pick from the 2018 draft is yet to make his mark on the league, battling ongoing hamstring complaints to rule out his debut, until now.

The highly-touted utility is believed to be in a strong position to run out against the Eagles in Round 2, adding another piece to the promising young outfit of the Suns.

The Fremantle veteran labeled the seasons hiatus as a “godsend”, with the 316-game midfielder facing an abrupt ending to his prized career in purple.

Mundy is set to return from a leg injury in parallel with the league’s return from the COVID-19 suspension, meaning the 34-year-old will have his chance to end his career with the Dockers on a high.

The 2018 rising star winner will be keen to return to the field, having played just the two games since Round 12 last year due to his 10-game suspension along with injuries forcing him out of Round 1.

A proven key figure under Nathan Buckley, the 21-year-old will be a massive in for the Magpies clash against Richmond.

Stephenson’s arrival will cause headache’s for selection at the club following Collingwood’s 52-point win over the Western Bulldogs.

The luckless Fremantle forward has returned to the training track and has joined his teammates in eyeing an elongated return in Round 2.

The Dockers spearhead has long suffered mental illness and looks to overcome his battle for a return to the game.

Hogan boarded the clubs flight to the Gold Coast for their clash against Brisbane on June 13 and will be sure to bring high spirits if he is to return in Round 2.

The Crows’ key defender suffered a season ending ACL injury in Round 1 last season and remained on the outside of selection during the clubs Round 1 loss to Sydney following a pre-season setback.

Now back to full fitness and eyeing a return, the promising young defender will have a strong impact on the current defensive woes at the Crows as they look to return to finals football.

The four-time premiership hawk made the move up north via free agency and hopes to rejuvenate his career following three seasons of ongoing injuries a heartache.

The 32-year-old will add a touch of experience and poise in the Lions back-third, with the club hoping to improve on their finals campaign this season after falling out in straight sets in 2019.

The Port Adelaide vice-captain has battled with a shoulder complaint for some time, with the club now hopeful his return will fall along with the league’s in Round 2, where Port clash with cross-town rivals Adelaide.

The bullish onballer remains to be in a race against the clock for selection, with his name in the side unquestionably vital for the clubs hopes of a strong 2020 campaign.

McKay missed Round 1 section due to injury and now looks set to join his teammates for their Round 2 selection against Melbourne with the weight of expectations now tenfold following doubts around fellow key-forward Charlie Curnow.

The 35-gamer has booted 50 goals across his three seasons with the club and will look to take a further step in his development to aid Carlton to a top-eight finish.

Another star in a race against the clock, Dixon’s fitness will hold large ramifications for Port Adelaide’s class against Adelaide in the Showdown.

The key forward will stand to be a cardinal component in the clubs return clash, with the 29-year-old hopeful to return to the field after featuring in just nine appearances last season.

A fit Dixon may just be Ken Hinkley’s best chance of reaching the top eight and a 2-0 start may just ignite the confidence they need.

Joining Dixon as a hopeful inclusion for Round 2, Watts will aim to reignite his own career following a season ending injury in Round 2 last season.

Watts looked be a a strong addition to Port’s backline following his arrival and may just be required to fill the void left by Dougal Howard.

The former No.1 selection has another chance at a fresh start and will hope to remain off the sidelines and make his finals debut.

The Fremantle youngster is rated as one of the the most promising tall defenders to enter the league in some time and stands a chance to gain selection in Round 2 after missing out on the clubs opening clash against Essendon.

The Dockers fell narrowly short to start the season and sit 0-1 as they eye their Round 2 match against Brisbane.

Young could be the fit the Dockers need down back to add an extra level of security when the game is all on the line once again.